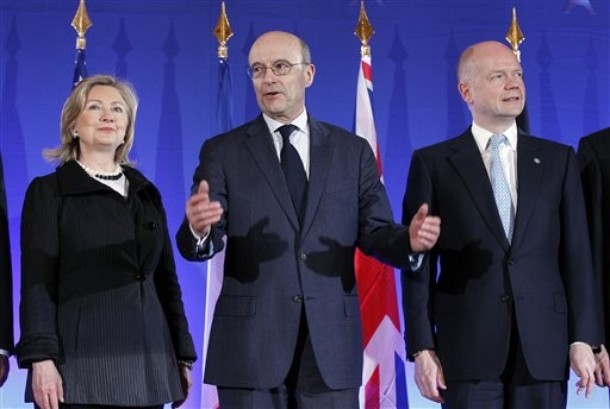 From Ian Traynor and Nicholas Watt, the Guardian:  The US, Britain, France and Turkey agreed to put the three-pronged offensive – a no-fly zone, an arms embargo, and air strikes – under a Nato command umbrella , in a climbdown by France that accommodates strong Turkish complaints about the scope and control of the campaign.

The deal appeared to end days of infighting among western allies, but needed to be blessed by all 28 Nato member states. At the end of a four-day meeting of Nato ambassadors in Brussels, Anders Fogh Rasmussen, the secretary general, said Nato had agreed to take command of the no-fly zone from the Americans. Disputes have raged at Nato HQ every day this week. Rasmussen contradicted leading western officials by announcing that Nato’s authority was limited to commanding the no-fly zone, but he signalled there was more negotiation to come.

"At this moment, there will still be a coalition operation and a Nato operation," he said. This meant Nato would command the no-fly zone and police the arms embargo. But on the most contentious part, air strikes and ground attacks against Gaddafi, consensus remained elusive.

The agreement emerged from phone calls between William Hague, the foreign secretary, Alain Juppé, the French foreign minister, Hillary Clinton, the US secretary of state, and Ahmet Davutoglu, the Turkish foreign minister, following rancorous attacks from the Turkish leadership on French ambitions to lead the anti-Gaddafi war effort. …

Political oversight will be in the hands of a committee of a smaller number of countries involved in the military campaign. …

Under the scheme agreed, the transfer to Nato will take place by the latest in London on Tuesday, when the parties to the coalition against Gaddafi gather in London for a special "contact group" conference. French sources said the Benghazi-based Libyan rebel leadership would be in London to attend. The conference will consist of two meetings: a war council made up of the main governments taking part in the military action, as well as a broader assembly including Arab and African countries devoted to Libya’s future.   (photo: AP)