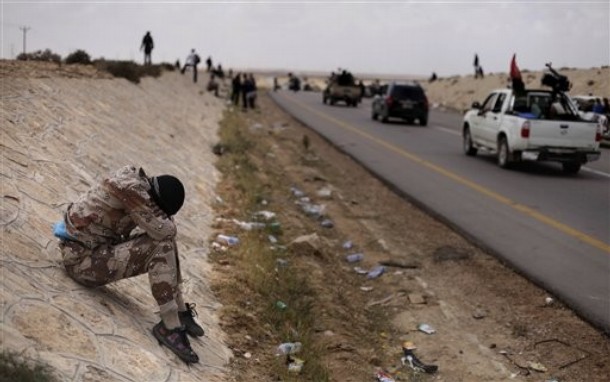 From Alexander Dziadosz and Angus MacSwan, Reuters:  A NATO-led air strike killed 13 Libyan rebels, a rebel spokesman said on Saturday, but their leaders called for continued raids on Muammar Gaddafi’s forces despite the "regrettable incident. …"

Most blamed a Tripoli agent for drawing the "friendly fire." "Some of Gaddafi’s forces sneaked in among the rebels and fired anti-aircraft guns in the air," said rebel fighter Mustafa Ali Omar. "After that the NATO forces came and bombed them."

But some gave a different account. "The rebels shot up in the air and the alliance came and bombed them. We are the ones who made the mistake," said a fighter who did not give his name. …

In Brussels a spokeswoman for NATO, which this week assumed command of the military operation launched on March 19, declined to say whether its forces were involved in the Brega incident.

"We are looking into the report," said spokeswoman Oana Lungescu. "However, if someone fires at our aircraft, they have the right to protect themselves."

NATO has conducted 363 sorties since taking over command of the Libya operations on March 31, and about 150 were intended as strike missions but NATO has not confirmed hitting any targets. …

In Benghazi, the rebel council named its "crisis team" on Saturday to administer parts of the country it controls.

Omar Hariri is in charge of the military department, with General Abdel Fattah Younes al Abidi, a long serving officer in Gaddafi’s armed forces, as his chief of staff.

Younes, a former Libyan interior minister, changed sides at the start of the uprising in mid-February but is distrusted by many in the rebel camp because of his past ties to Gaddafi.  (photo: AP)