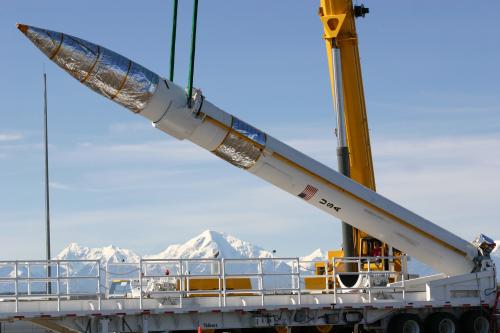 From Fred Weir, the Christian Science Monitor:  Media reports that the two sides reached a deal at the Lisbon summit were premature, if not wrong. In fact, experts say, NATO leaders rejected [Russian Prime Minister Dmitry] Medvedev‘s proposal to build a joint "sectoral" missile-defense system and the two sides agreed only to set up a committee to discuss other ideas.

Under Medvedev’s plan, NATO and Russia would build separate antimissile shields, and the two would exchange data and monitoring teams. The concept, explained to reporters by Russia’s ambassador to NATO, Dmitry Rogozin, is "if there is a missile flying over our territory that is heading toward the US, we will shoot it down. If there is a missile coming toward Russia over the US zone of responsibility, then the Americans will shoot it down. But in either case, Russia retains control over its own missile-defense system, and NATO over its own."

Russia inherited from the USSR a limited, and now outdated, missile defense system meant to defend Moscow from nuclear attack. Early this month, Russia’s Defense Ministry said that it’s moving forward to build an "integrated air defense network" within the framework of the Collective Security Treaty Organization, which comprises Russia and six other post-Soviet states, beginning with the imminent delivery of 40 advanced S-300PS air defense missiles to Kazakhstan.

Western experts say Medvedev’s missile-defense plan was unacceptable, in part due to the Russian requirement that NATO must not install radar or missile interceptors that could cover Russian territory. A missile from North Korea or Iran targeting the US would inevitably traverse Russian territory, they say, and NATO is not going to turn a blind eye to those threats.

"It was not a well-thought-out proposal, but that’s not to say that we couldn’t come up with some sort of missile-defense cooperation. The problem is that NATO itself has no clear plan, and would probably rather wait until it has one before thinking about how to involve Russia," says Dmitry Simes, president of the Nixon Center, a Washington-based think tank. …

Most Russian experts agree that, if there is to be a NATO system with coverage of Russian airspace, Moscow would accept nothing less than command-level participation.

"Do you expect us to believe that, in a crisis, we could rely on some American general to defend Moscow?" says Viktor Kremeniuk, deputy director of the official Institute of USA-Canada Studies in Moscow. "The reverse is true as well. So the ideal solution is to create a joint command…. I think Medvedev’s Lisbon proposal was just an opening move, and that he is willing to discuss other ideas. But if [the West] keeps rejecting everything we suggest, then, at some point, strategic thinkers in Moscow are going to decide that we need to change the paradigm, and think about how to defend ourselves."  (photo: U.S. Army)