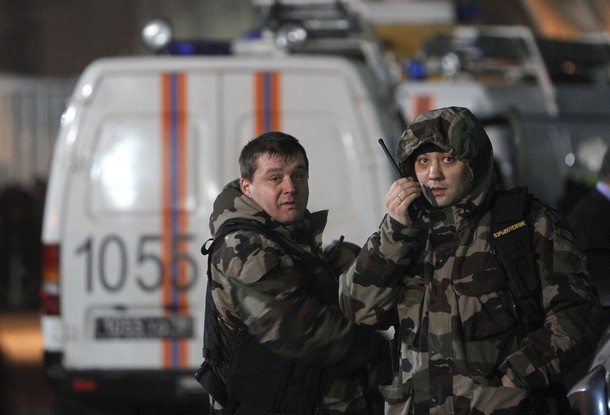 From Lucian Kim, the International Herald Tribune:  The suicide bombing at Moscow’s busiest airport last Monday exposed more than a failure by security services to man metal detectors or extinguish potential threats. The terrorist attack, which killed 35 people and injured more than 100, revealed cracks in the rigid political system that Prime Minister Vladimir Putin built over the last decade. It was those weaknesses that made last week’s tragedy possible — and provide the conditions for new attacks.

Terrorist acts by definition prey on the vulnerabilities of governments and their security agencies. No country, no matter how well-prepared, can consider itself immune to such strikes. Terrorists have targeted metropolises like New York, London, Madrid and Stockholm in recent years.

What makes Moscow stand out is the regularity of attacks and the government’s inability to thwart recurrences.

The Russian capital has suffered eight major terrorist acts over the past decade, according to Vedomosti newspaper’s count, including the 2002 Dubrovka theater siege and subway bombings in 2004 and 2010. Headlines about political assassinations and bomb blasts in Russia’s North Caucasus region — where an Islamist insurgency has mutated out of Chechnya’s separatist struggle of the 1990s — are so frequent that they rarely dominate the local news cycle for more than a few hours. …

The unsolved murders of government critics are often cited as evidence of a callous police state. In fact, the killings better illustrate the extent to which state control has broken down. Corruption and a lack of accountability mean that law enforcement agencies have largely abdicated their intended functions. Sixty percent of Russians believe cops are primarily concerned with “securing their own interests,” while 24 percent think the police consider citizens’ safety a priority, according to a Levada Center poll published in November.

As if having a bloated but incompetent police force weren’t bad enough, Russia faces the additional problem that its terrorist threat is coming from inside its borders. …

The paradox of the costly retention of Chechnya is that few Russians view the North Caucasus as an integral part of Russia worth keeping. Just three days before the Domodedovo attack, Putin pledged the region $13.5 billion in investments this year. Yet the thousands of chauvinists who chanted “Russia for Russians” at a rally outside the Kremlin walls in December were not just demanding the expulsion of North Caucasus diasporas but also the abandonment of a region seen as leeching off Moscow. The airport bombing only heightens the potential for interethnic strife.

Lucian Kim is a journalist who has worked in Russia since 2003. He is working on a book about the Putin era.  (photo: Reuters)