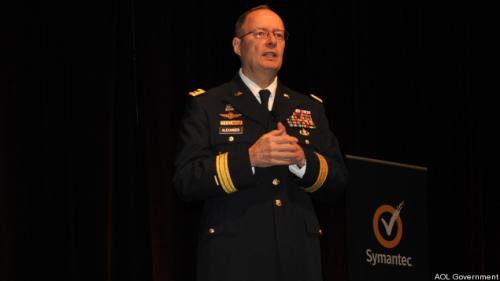 From Henry Kenyon and Wyatt Kash, AOL Defense:  The nation’s top military cyber commander offered his version of how government and military agencies are likely to work together when America suffers cyber attacks, and warned that industry needs to take a greater role.

We have laid out lanes of the road," Gen. Keith Alexander, commander of Cyber Command and director of the National Security Agency said, sketching them out in broad terms for an audience of security professionals yesterday at a symposium sponsored by Symantec here.

The issue, he said, is "when and what does the Department of Homeland Security, the FBI, U.S. Cyber Command, and NSA do to defend the country from cyber attacks."

The NSA would be responsible for foreign intelligence and detecting enemies overseas while Cyber Command would be called in if there was a direct cyber attack on U.S. infrastructure, Alexander said.

DHS would take the lead domestically, setting standards and regulations to follow, and serving as first responder, said Alexander.

Most importantly, the process must be transparent and it must be headed by a civilian agency such as the DHS. "They are the public face," he said. "This is a job for all of us, and we need to help DHS get there," he said.

The FBI, meanwhile, would be responsible investigations and in particular the issue of attribution, which remains one of the thorniest aspects of responding to cyber attacks.  (photo: AOL Government)