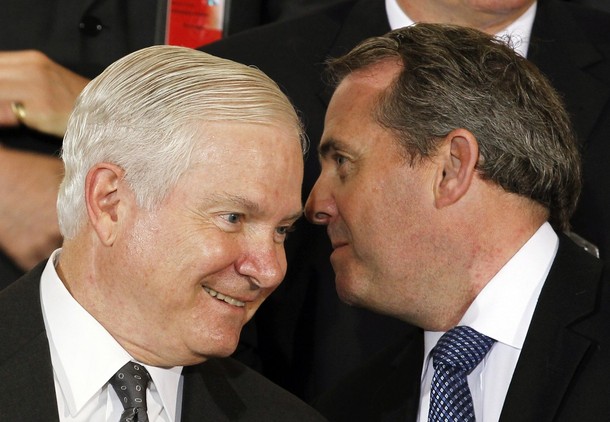 From James Kirkup, the Telegraph:  In private exchanges, the Pentagon told defence ministers and senior officials that the US was worried Britain’s cuts could widen the transatlantic divide in military power and spending. …

[British Defense Minister Liam] Fox is considering flying out to Washington to meet US officials to assuage their worries later this month, before the defence review ends.

Whitehall sources have disclosed that provisional estimates from MoD negotiations with the Treasury show core defence spending could fall below Nato’s 2 per cent standard — perhaps to as little as 1.7 per cent of GDP. …

Michele Flournoy, the under-secretary for policy at the Pentagon, telephoned Tom McKane, the MoD’s strategy director, to raise the issue. “The Americans are sympathetic, but it’s fair to say they have some fairly serious concerns about where we will end up,” said a Whitehall source.

Robert Gates, the US defence secretary, has also discussed the coming cuts with Dr Fox. It is understood that he has told the Defence Secretary that the US believes it is vital that Britain retains its nuclear deterrent and its extensive intelligence-gathering operations.

He also underlined the American desire for Britain’s special forces units to be able to participate in US-led counter-terrorism operations.  (photo: Reuters)