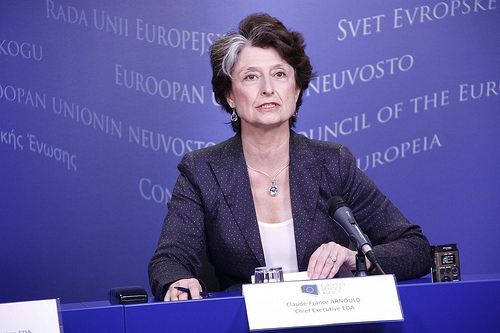 From Judy Dempsey, International Herald Tribune:  At the end of this month, Anders Fogh Rasmussen, the NATO secretary general, will release new figures on defense spending by the 28 Alliance members.

They will almost certainly show a decline for most countries. The global financial crisis, followed by the euro crisis, has put immense pressure on finance ministries to cut budgets, including, in most places, defense budgets. . . .

Mr. Rasmussen has repeatedly asked Alliance members to invest in defense to deal with new threats, such as cyber and energy security. He also fears that the technological gap between Europe and the United States will widen so much that ‘interoperability,’ the ability to operate together on missions, will be endangered.

The United States spends 31 percent of its defense budget on investment. The Europeans spend 22 percent, according to Claude-France Arnould, the chief executive of the E.U.’s European Defence Agency, which was established over a decade ago to promote defense cooperation.

There are few signs that Europeans are willing to invest more. Indeed, defense spending among E.U. member states was at a record low, Ms. Arnould said during a security conference in Berlin last November. . . .