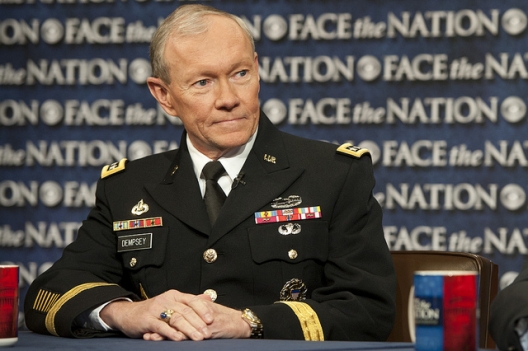 Terrorism and Russian aggression are two “very distinct threats” to European security, according to the chairman of the Joint Chiefs of Staff.

The leaders discussed a variety of topics in meetings here today, including threats to Italy’s southern flank. Dempsey praised Italy for its significant contributions to coalition missions, including in Afghanistan and Iraq.

The threat from Islamic terrorists will not get any easier, the chairman said.”I think this threat is probably a 30-year issue,” he said, noting that terrorists easily recruit young fighters via the Internet. Counter-messaging is one of the lines of strategy in defeating extremists, he said.

Italy has made important contributions to the campaign against the Islamic State of Iraq and the Levant, or ISIL, the chairman said.

For the first time in a “very long time,” the United States and its allies are facing the “very distinct threats” of a conventional state threat from Russia, Dempsey said, and the unconventional threat of terrorism from extremists.