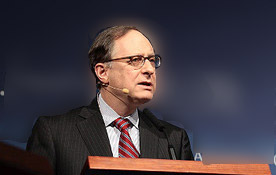 As the Vilnius Summit of the Eastern Partnership approaches, we are reminded of a fundamental principle of the Helsinki Final Act that is a key element of national security and sovereignty.   That any nation is free to build relations with partners of its choice.

We at NATO were reminded of this principle back in 2010, when the democratically elected government of Ukraine decided that it would no longer seek to join NATO.   NATO respects Ukraine’s decision because we respect every country’s sovereign choices.

But not only that.  The Allies also agreed to maintain the same, intensive level of practical cooperation with Ukraine that was agreed at our Bucharest Summit in 2008.  This meant continuing the Annual National Programme, with all its practical advice and assistance, that’s aimed at helping Ukraine to develop into a democratic, prosperous and free country.

For its part, Ukraine has not only maintained its constructive cooperation with NATO.  Over the past three years, our cooperation has become arguably more intensive and productive than ever before.

Ukraine was not only the first NATO partner to join the NRF.  It was also the first Partner to contribute to our anti-piracy operation off the Horn of Africa, Operation Ocean Shield, with the deployment later this fall of the Hetman Sahaidachny, the flagship of the Ukrainian Navy.

Of course, Ukraine contributes not only to NATO operations.  It is also a major contributor to crisis response operations led by the United Nations, the European Union and the OSCE.

Ukraine is an active contributor to the EU’s Battle Groups, and is developing closer relations with the EU in the framework of the Common Security and Defence Policy.  This follows naturally from the long-standing policy of successive Ukrainian governments to seek Association with and ultimately membership in the European Union. . . .

As I look to the future, I see great potential for closer cooperation between Ukraine and NATO in a number of areas.  One particularly promising area is defence reform and military transformation.  And I note that a NATO expert team on these issues has arrived in Kyiv just yesterday for consultations with Ukrainian experts. . . .

So, in conclusion, the future of NATO-Ukraine cooperation looks very promising.  Ukraine may not be seeking to join NATO, but its intensive cooperation with NATO has advanced its top foreign policy priority of integration with the European Union.  For my part, I am very proud of the role that NATO is playing to help Ukraine achieve this goal.

Excerpts from video address by NATO Deputy Secretary General Alexander Vershbow to the Conference on International Organisations and the National Security of Ukraine (Kyiv, Ukraine), September 17, 2012.