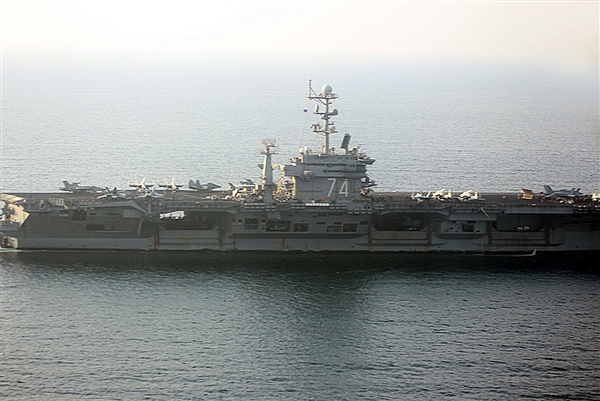 From Jim Miklaszewski and staff, MSNBC:  Casting aside current tensions between the U.S. and Iran, the U.S. Navy on Friday rescued 13 Iranian seamen who were being held captive by Somali pirates in the Gulf of Oman.

A Navy helicopter from the aircraft carrier USS John C. Stennis, responding to a distress call from a merchant ship under attack by pirates, chased the pirates to their "mother ship," an Iranian-flagged dhow that had earlier been hijacked.

A heavily-armed counter-piracy team from the Navy destroyer USS Kidd met little resistance when they boarded the dhow where they found 15 armed pirates and the 13 Iranians who were being held hostage. The pirates were taken into custody. The Iranians were set free in their dhow.

The rescue occurred about 175 miles southeast of Muscat, Oman.

It came less than two days after Iran threatened never to allow the USS John C. Stennis back to the Persian gulf following its departure last week for the Gulf of Oman and North Arabian Sea. . . .

Britain’s defense secretary warned Iran Thursday that any attempt to block the key global oil passageway the Strait of Hormuz would be illegal and unsuccessful — hinting at a robust international response.

During his  first visit to the Pentagon for talks with U.S. Defense Secretary Leon Panetta, Philip Hammond told the Atlantic Council in Washington that the presence of British and American naval ships in the Persian Gulf would ensure the route is kept open for trade.  (photo: AFP/Iran state media)