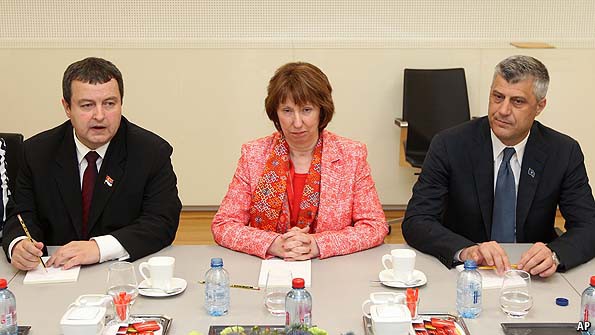 From T.J., Economist:  “HABEMUS PACTUM!” tweeted Vlora Citaku, Kosovo’s minister for European integration. Serbia and Kosovo had just reached a deal. It came on April 19th after ten grueling rounds of negotiation between the prime ministers of the two countries under the personal supervision of Baroness Ashton, the European Union’s foreign policy chief. . . .

The deal was initialed by Hashim Thaci, the prime minister of Kosovo, who is a former leader of the Kosovo Liberation Army, a guerrilla force which fought the Serbs in 1998-99. He negotiated with Ivica Dacic, the Serbian prime minister who, during the Balkan wars of the 1990s was a close associate of Slobodan Milosevic, the then Serbian leader. Also present was Aleksandar Vucic, the Serbian deputy prime minister, a former extreme nationalist.

The agreement unlocks the way for both countries to continue on their path to EU integration. Implicit is the understanding that, by making the agreement, Serbia will be now be given a green light to open EU accession talks. Kosovo will get a formal commitment to negotiating an earlier step in the process, known as a Stabilisation and Association Agreement.

The 15-point agreement (scroll down for English) is expected to be formally endorsed by the two governments and parliaments in the next 48 hours.

Kosovo, with its majority Albanian population declared independence from Serbia in 2008. It had not been under Serbian control since the end of the Kosovo war in 1999. Kosovo is now recognised by just under 100 countries (the exact number is disputed) but not Serbia, Russia, China and five of 27 EU countries. . . .

The essence of the deal is that while Serbia does not recognise Kosovo as a state, it concedes its legal authority over the whole territory. In exchange the Kosovo authorities concede a level of autonomy to four Serb-controlled areas of northern Kosovo. They will set up an association, which will take care of education and health and other matters. The deal says that there will be one police force in Kosovo but that the Serb regional commander for the north will be chosen from a list nominated by the mayors of the north.

A compromise formula was found over the vexed issue of courts and elections are to be held this year for the northern municipalities which are now elected under the Serbian not Kosovo system.

There are believed to be some 140,000 Serbs in Kosovo out of a total population of 1.7m. About one third of them live in the north. The rest live in areas of Kosovo which, in the last few years, have begun to integrate into the rest of the country in terms of municipal organsations, though not in terms of education and health. Some of these areas could accede to the new Serbian association.

The deal does not prevent Serbia from funding education and other services as it does now. According to Mr Dacic and Mr [Petrit] Selimi, the Kosovo Security Force, Kosovo’s de facto army, will not deploy in the north, at least for some years. Following the making of the deal Lady Ashton, Mr Dacic and Mr Thaci went to visit NATO to discuss help in implementing the deal. A photo showed them together on the same side of the table talking to NATO chiefs, not facing one another as they have until now.   (photo: Economist)