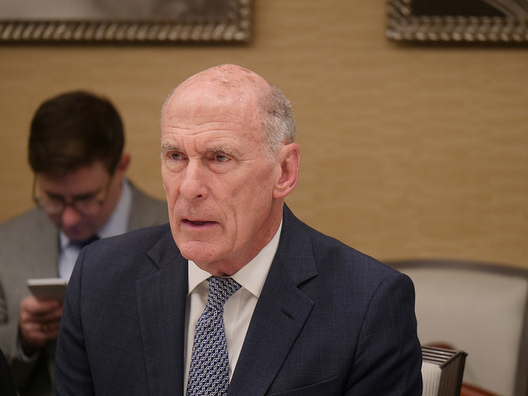 Daniel Coats: Well, could is not a definitive word here. Could someone else be looking at how to do this relative to our elections? Possibly, rouge states, whatever. We know others have potential capability. But, it’s undeniable that the Russians are taking the lead on this. Basically, they are the ones that are trying to undermine our basic values, divide us with our allies. They are the ones that are trying to wreak havoc over our election process. We need to call them out on that. It’s critical that we do so, and then take steps to make sure that they are not able to do this with an election coming up….

Andrea Mitchell: I want to ask you … Well, also ask you about a real red line that was crossed with the nerve agent that was used in the UK…. What is the risk that such action could be taken, such targeted killings could be taken against defectors or other assets here in the US?

Daniel Coats: It’s a risk. The Russians do bold things and extraordinary things. The pushback that we had with a combination of our partners against Russia on this was very, very important, sending the right signal, but it should have told the world that, if you think the Russians are trying to be good neighbors, this is the kind of things they still do. By the way, the former director of the KGB is the one leading their nation. Those people usually don’t have the kind of training that our presidents have.

Andrea Mitchell: Again, we should be very wary around the former KGB leader who is leading their nation?

Jeremy Bash: Question about Russia also. Was the game plan going to Helsinki to potentially confront the Russians on their violations of the INF treaty. And also relatedly on arms control, do you assess or do we assess that the Russians would be interested in having an arms control agreement to actually continue some of the reductions in levels of nuclear weapons?

Daniel Coats: We know that that issue was discussed in the meeting. I don’t know what came from it or what the details are. I think it’s something that we should go forward with. If Russia wants to be the country that they say they want to be, they have to act in a way that reaches that goal. It’s their actions and not their words that matter. Their actions have been pretty nefarious toward us, so we’ll see where that goes. I don’t have high hopes on that, but I would wish we could sit down and talk about that.

Michael Gordon: Do you think Russia has sufficient influence in Syria to force Iranian military forces and Iranian back militias to vacate the country, since that’s a policy checked amongst the administration, just from an analytical, intelligence perspective?

Daniel Coats: We have assessed that it’s unlikely Russia has the will or the capability to fully implement and counter Iranian decision and influence. It’s a big country. There are a lot of hot spots there . Russia would have to make significantly greater commitments from a military standpoint, from an economic standpoint. We don’t assess that they are keen to do that.