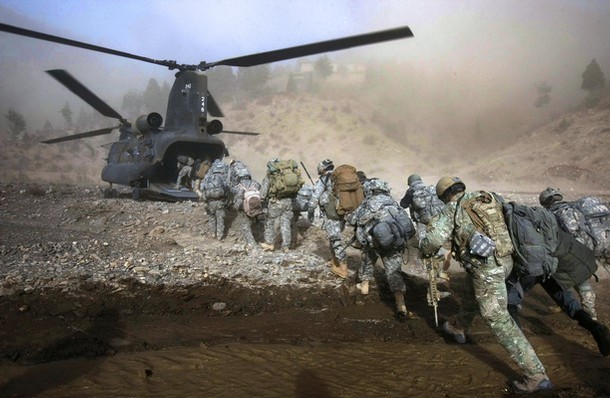 From Robert Kagan, the Weekly Standard:  "America, it is time to focus on nation building here at home.” This was the core sound bite in President Obama’s speech announcing the drawdown of forces in Afghanistan, and it was an extraordinary statement. Of course, such sentiments have been uttered many times over the years. George McGovern’s “Come Home America” campaign theme in 1972 comes to mind, and we’re sure Patrick Buchanan, Ron Paul, Dennis Kucinich, and George Will have said either exactly that or something similar at one time or another.

Not since the 1930s has an American president struck such an isolationist theme in a speech to the American people, however. By juxtaposing the winding down of the war in Afghanistan with the need to focus on domestic problems, Obama gave presidential sanction to the erroneous but nevertheless widespread belief that whatever the United States does abroad detracts from our ability to address our problems at home. We wonder if the speechwriters, policymakers, and of course the president himself fully understood the damaging effect such a statement can and probably will have on the entire scope of American foreign and defense policy.

We can imagine that line being thrown back in the administration’s face the next time it comes to Congress to defend the foreign aid and defense budgets, the intervention in Libya, or the forward deployment of U.S. forces in Asia and Europe. But maybe Obama’s increasingly evident concern about winning reelection trumped such issues. Maybe the cheap shot—with its clear implication that the efforts of our military in Afghanistan actually detract from the nation’s well-being—was too good to pass up.

And it is a cheap shot. Here’s the core point that Ron Paul, Dennis Kucinich, George Will, and now Barack Obama can’t quite seem to understand: Failure in Afghanistan will cost much, much more than the billions spent on this surge. What was the cost to the U.S. economy of the attacks on 9/11? What will be the cost if the terrorist groups now operating in Afghanistan—the Haqqani network, Lashkar-e Taiba, as well as al Qaeda—are able to reconstitute safe havens and the next president has to send troops back in to clear them out again? It is a peculiar kind of wisdom that can only see the problems and costs of today and cannot imagine the problems and costs of tomorrow.  (photo: Getty)