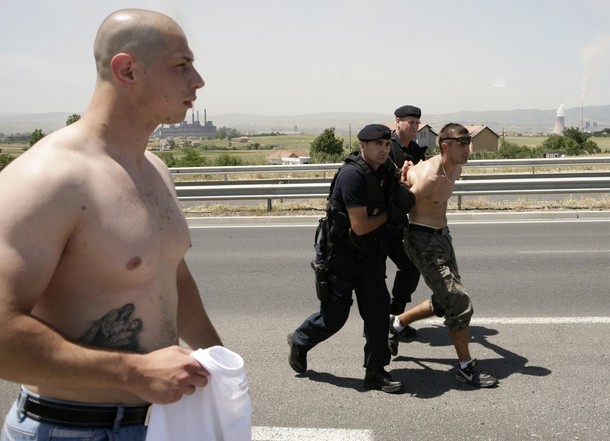 From Fatos Bytyci and Aleksandar Vasovic, Reuters:  More than 50 people were injured in clashes on Thursday when the authorities in Kosovo deported a group of visiting Serbs who accused the police of shooting at them, leaving one with life-threatening gunshot injuries.

The group of about 70 mostly young Serbs was travelling in two buses to Gazimestan, a religious and historic site close to the capital Pristina, when police turned them back, arguing they had become "very aggressive, drunk and were provoking both police and citizens".

Kosovo declared independence from Serbia in 2008, but tensions between the 90 percent Albanian majority and the small Serb minority that refuses to accept it is an independent country have persisted, and relations with Belgrade itself have remained strained.

Serbian health authorities said one Serb sustained life-threatening injuries in the clashes and that five others were hospitalized with gunshot wounds. A total of twenty Serbs sought medical care in the towns of Kursumlija and Prokuplje, just outside Kosovo.

Police in Kosovo declined to confirm whether they had fired live rounds at the Serb group. . . .

Kosovo’s Interior Minister Bajram Rexhepi said the Serb youths had thrown stones and other heavy objects at the police shortly after being expelled from Kosovo territory.