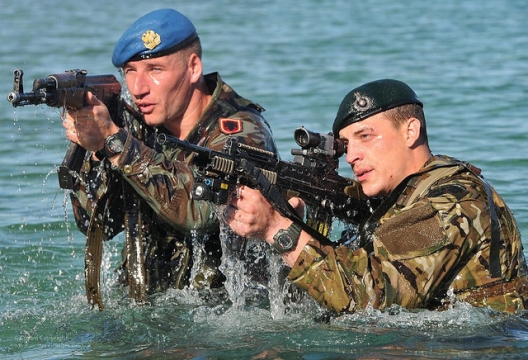 From the start, I have described this crisis as a wake-up call for the alliance, and for all those committed to a Europe that is undivided, free and at peace. . . .

A month from now, at the Nato summit in Wales, we will take important decisions to make our alliance even fitter, faster and more flexible. We will adopt an action plan to boost our readiness, which goes in the direction recommended by the UK House of Commons defence committee last week. We are looking closely at how we can best deploy our forces for defence and deterrence. We are considering reinforcement measures, including the pre-positioning of equipment and supplies. We are reviewing our defence plans, threat assessments, intelligence-sharing agreements, early-warning procedures and crisis response planning. We are developing a new exercise schedule, in more locations, covering more forms of defence than ever before – from tanks in Poland to cyber defence in Estonia and combined operations in Spain and Italy.

We want to further strengthen our multinational response force, designed to respond rapidly to any crisis, anywhere. Meanwhile seven allies, led by the UK, are developing a joint expeditionary force. Denmark, Germany and Poland have also started work to raise the readiness of a multinational corps based in the Polish city of Szczecin. All this will enable us to respond more quickly to challenges in the region, including where we have little warning.

But readiness requires resources and strong political will. During the past five years, Nato allies have on average cut defence spending by 20 per cent. Russia has increased its defence budget by 50 per cent. While the US and some European allies, including the UK, have invested significantly in modernising their forces, others need to do more.

As our economies begin to recover, we need to reverse the trend of declining defence spending. This may not be easy but it is vital. Encouragingly, some countries – such as Poland, Romania and the Baltic states – are already taking clear steps in that direction. I expect the summit will show we are prepared to invest more to keep our defences strong.

Russia’s actions cannot be ignored. The post-cold-war world order is at stake. So Nato is needed more than ever. In Wales, we are determined to show that Nato means business.

The writer is secretary-general of NATO.