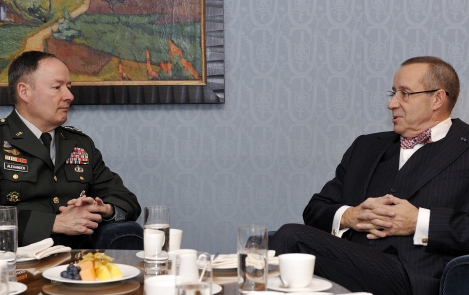 From the Office of the President of Estonia:  The President, Mr. Toomas Hendrik Ilves, met with the Cyber Force Commander of the United States of America, General Keith B. Alexander, who is also the Director of the US National Security Agency (NSA).

According to the President, the protection of networks that are important for NATO and its allies and primary civilian information infrastructures is the most relevant.

“We have no other choice today – NATO must enhance the importance of cyber defence in joint activities, operative planning, the drafting of emergency plans and management level, including, for example, the organisation of cyber exercise,” said the Estonian Head of State.  (photo: Toomas Volmer) (via ISRIA)