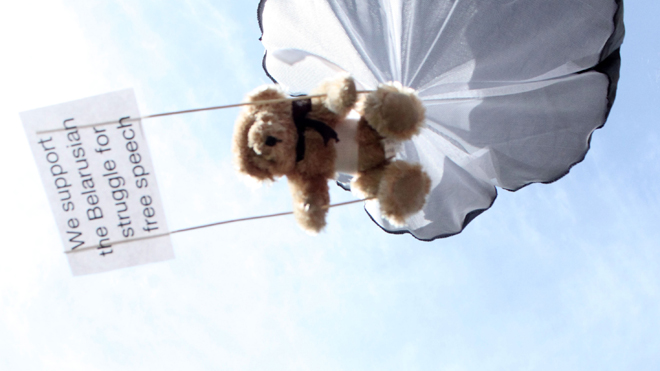 From Reuters:  Belarus’s relations with the West took a turn for the worse on Friday as EU governments agreed to reprimand Minsk for expelling the Swedish ambassador in a row over a pro-democracy stunt involving an air drop of teddy bears on Belarus’s territory.

At an emergency meeting in Brussels, senior envoys of European Union states said the dispute, in which Belarus also withdrew its embassy staff from Sweden, would damage the bloc’s already strained relations with the government of President Alexander Lukashenko. . . .

"Everyone around the table were absolutely clear that this was not just a situation merely between Sweden and Belarus. It’s a situation that … affects the EU’s relations with Belarus," Olof Skoog, a Swedish diplomat who chairs talks on foreign policy issues among EU states, said.

"There is going to be a very clear message to all Belarusian ambassadors around Europe in the next few days expressing full solidarity with the Swedes on this," he said.

The EU message comes at a time when its governments are preparing for a regular review of European sanctions against Lukashenko in October.

From the AP:  Oloof Skoog, chairman of the EU’s Political and Security Committee, said after the meeting Friday that the union may introduce new sanctions in the near future against the former Soviet nation. He also said the bloc would review the level of its diplomatic representation in Minsk. . . .

In February the bloc temporarily withdrew its ambassadors over a similar dispute involving Belarus’ treatment of diplomats. They returned two months later.  (photo: Per Cromwell/AP)