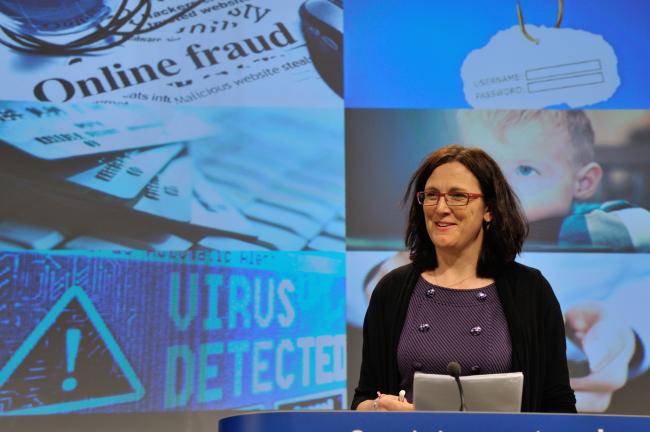 From the European Commission:  [W]orldwide, more than one million people become victims of cybercrime every day. The cost of cybercrime could reach an overall total of USD 388 billion worldwide.

Today, the European Commission proposed to establish a European Cybercrime Centre to help protect European citizens and businesses against these mounting cyber-threats. The centre will be established within the European Police Office, Europol in The Hague (The Netherlands). The centre will be the European focal point in fighting cybercrime and will focus on illegal online activities carried out by organised crime groups, particularly those generating large criminal profits, such as online fraud involving credit cards and bank credentials.

The EU experts will also work on preventing cybercrimes affecting e-banking and online booking activities, thus increasing e-consumers trust. A focus of the European Cybercrime Centre will be to protect social network profiles from e-crime infiltration and will help the fight against online identity theft. It will also focus on cybercrimes which cause serious harm to their victims, such as online child sexual exploitation and cyber-attacks affecting critical infrastructure and information systems in the Union.

"Millions of Europeans use the Internet for home banking, online shopping and planning holidays, or to stay in touch with family and friends via online social networks. But as the online part of our everyday lives grows, organised crime is following suit – and these crimes affect each and every one of us," said Cecilia Malmström, European Commissioner for Home Affairs. "We can’t let cybercriminals disrupt our digital lives. A European Cybercrime Centre within Europol will become a hub for cooperation in defending an internet that is free, open and safe. . . ."

The European centre will warn EU Member States of major cybercrime threats and alert them of weaknesses in their online defences. It will identify organised cyber-criminal networks and prominent offenders in cyberspace. It will provide operational support in concrete investigations, be it with forensic assistance or by helping to set up cybercrime Joint Investigation Teams. . . .

The Centre will serve as a platform for European cybercrime investigators, where they can have a collective voice in discussions with the IT industry, other private sector companies, the research community, users’ associations and civil society organisations. Finally, the Centre is to become the natural partner for wider international partners and initiatives in the field of cybercrime.

The centre is expected to start operations in January of next year.  (photo: European Commission)