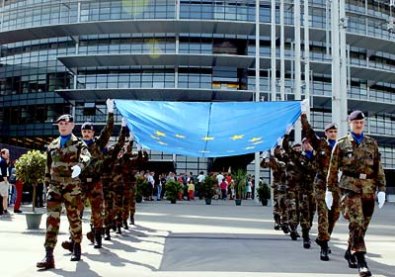 From AFP:  Europe’s grand defence project, already wounded by divisions over Libya, is stuck in a political no-man’s land as Polish ambitions to revive it face indifference among allies.

Poland had signalled for months that breathing new life into European Union defence would be a centrepiece of its six-month presidency of the 27-nation EU before it took over from Hungary on July 1.

But in the face of little enthusiasm among partners, most surprisingly France, usually the most ardent backer of EU defence, Warsaw agreed to scale down its programme for more modest goals, a European diplomat said.

Poland had hoped to seize on provisions in the nearly two-year-old Lisbon Treaty that foresee the deepening of military cooperation between EU states, with the ultimate goal of building a common security and defence policy.

Instead, EU foreign ministers meeting in Brussels on July 18 will merely review a report presented by EU foreign policy chief Catherine Ashton on possible ways for states to pool and share military capacities.

Cracks emerged when France and Britain spearheaded an air war in Libya to stop Moamer Kadhafi from crushing a rebellion, while Germany and Poland refused to join the battle despite their prominent roles within the EU and NATO. . . .

"What revival of European defence policy are you talking about," said a senior German official. "European defence does not exist today and this has little chance of evolving (in the short-term).  (photo: Cafe Babel) (via Global Europe)