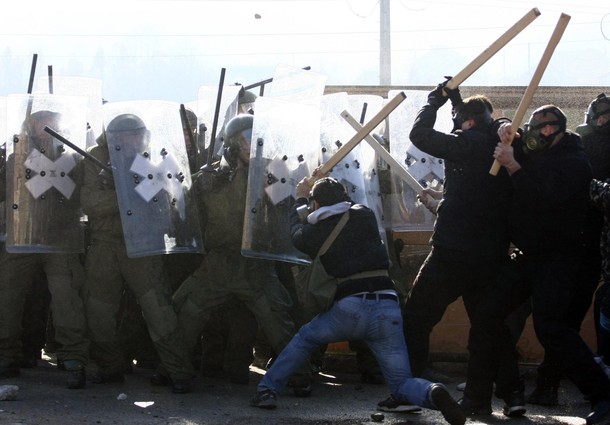 From Slobodan Lekic, the AP:  The European Union and NATO on Thursday condemned attacks by Serb militants in Kosovo that have injured 50 NATO peacekeepers and jeopardized Serbia’s application to become a candidate for EU membership. . . .

Kosovo broke away from Serb rule in 2008, but Serbia has never accepted its independence. For months, Kosovo Serbs have blocked roads in the tense northern region to reject the Pristina government’s authority. . . .

"The use of violence against (NATO troops) is unacceptable and we deplore it," the North Atlantic Council, NATO’s governing body said in a statement Thursday. "We urge all parties to exercise restraint and … ensure freedom of movement without delay."

NATO wants the barriers removed because they cut off supply to a military base in the north. The alliance has ultimate authority over security in Kosovo. . . .

The statements came as Serbia and Kosovo took part Thursday in the latest round of EU-sponsored talks in Brussels on normalizing border procedures and other practical matters. The talks are seen as a key condition for Serbia to be granted candidate status in the EU next week.  (photo: Reuters)