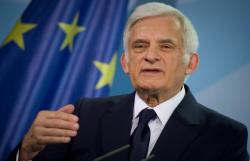 Buzek’s mission to Washington is part “wake up call” that Washington should recognize the growing powers of the 27 nation, 736-member European Parliament, which represents the largest market in the world, and some 500 million citizens in all, a European official said.

The "vast majority of legislation and regulations come out of the EU – not the individual member states parliaments," a European official said. “American legislators need to wake up.”

The Obama administration already got a cold lesson in the European parliament’s expanded powers back in February, when Brussels voted to stop sharing SWIFT financial transaction data with the United States, which Washington had sifted to detect possible terrorist financial transactions.  (photo: Getty)