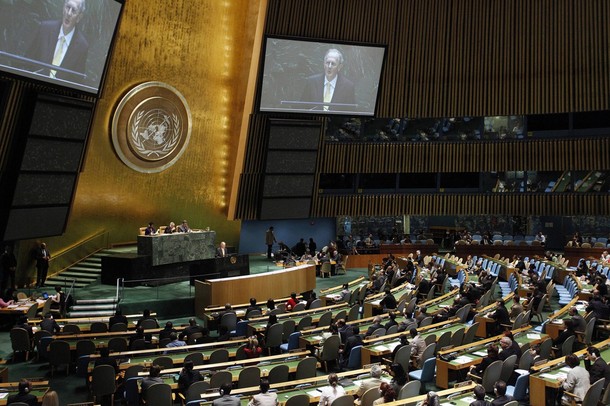 From Leigh Phillips, the EUobserver:  European Council President Herman Van Rompuy will in future be able to address the UN chamber no differently from US President Barack Obama or Iranian leader Mahmoud Ahmedinejad under draft reforms agreed by member states.

EU countries at meetings in Brussels and New York have agreed to table a resolution in the UN General Assembly (UNGA) to give the union the right to speak, according to a UK ministerial letter sent out to British MPs on Wednesday (14 July) and seen by EUobserver.

The EU currently has only observer status at the UN. Its delegates do not sit among the UN member states, but off to the side, along with entities such as the Vatican, the Red Cross and the Arab League.

The symbolic sitting arrangements are not due to change.

But if the motion, which is to be tabled in the coming weeks, is approved by the general assembly, the EU will also be awarded other rights enjoyed by fully-fledged UN members, such as the right to make proposals and submit amendments, the right of reply, the right to raise points of order and the right to circulate documents.

There will also be additional seats put in for the EU’s foreign policy chief, High Representative Catherine Ashton and her officials.

An EU diplomat said the idea behind the changes is to boost the profile of the EU as an entity in itself at the international level.  (photo: Reuers)