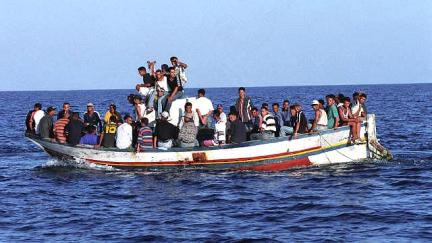 From Slobodan Lekic, the AP:  An EU rights group has blasted NATO and Western coast guards for failing to aid a boatload of migrants, dozens of whom died while adrift in the Mediterranean Sea during last year’s military campaign against Libya.

A report by a Council of Europe committee said that only nine of 72 people on board the vessel survived after it drifted in open seas for two weeks without assistance after its engine failed. . . .

"NATO failed to react to the distress calls, even though there were military vessels under its control in the boat’s vicinity when the distress call was sent," the report, published Thursday, said.

The report said that a helicopter dropped biscuits and water to the migrants but never returned, while a large military vessel came into close contact with the boat but ignored obvious distress signals.

The migrants eventually drifted back to Libya, but not before most of those aboard died of exposure or thirst. . . .

"To help determine what happened, NATO provided a significant amount of information to the Council of Europe," spokeswoman Oana Lungescu said. "We have no record of any NATO aircraft or ship having seen or made contact with this particular boat."

The report also accused Italy and Malta of failing to launch search and rescue operations although their rescue coordination centers had pinpointed the position of the stricken vessel.  (photo: Council of Europe)