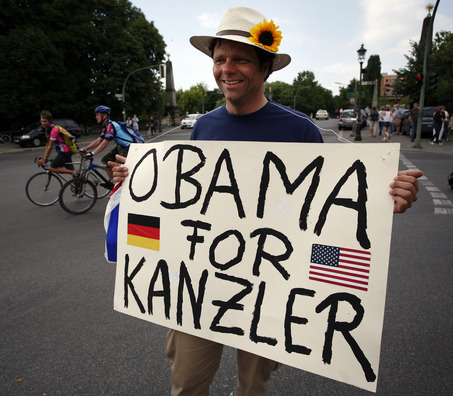 From Luke Baker, Reuters:  President Barack Obama‘s popularity remains high in Europe but has fallen in the past year as doubts emerge about some of his foreign policies, an opinion poll published on Wednesday showed. …

Most of the Europeans surveyed said they wanted the United States to exert strong leadership in world affairs, but fewer than half approved of how he was managing relations with Iran or how he was going about stabilizing Afghanistan.

Overall, the survey painted a picture of a broadly popular president, with 78 percent of Europeans approving of his leadership, down from 83 percent in 2009, but one whose skills were called into question on major policy decisions.

"(This year’s survey) reveals the fault lines that remain across the Atlantic and the work that is left to be done," said Craig Kennedy, president of the German Marshall Fund of the United States, a think tank that sponsors the poll with Italian foundation Compagnia di San Paolo.

Despite some tension between the United States and the European Union over economic policy, particularly when it comes to the fallout from Greece’s debt crisis and how to manage the economic recovery, most of those surveyed (54 percent of Americans and 58 percent of Europeans) said relations were good.  (photo: Miguel Villagran/AP)