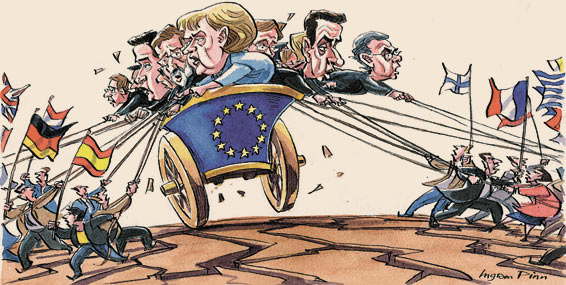 From Gideon Rachman, the Financial Times:  The construction of a group identity typically takes generations. But Europe’s politicians no longer have the luxury of time. Unless they can persuade the 500m or so citizens of the EU to feel more attachment to Europe and less to their nations, they may be unable to take the necessary steps to save the euro.

Most analysts reckon that, to survive, the euro will have to be backed by a much bigger European federal budget, common debt (eurobonds) and a more powerful central government. These things do not have to emerge immediately, but the direction of travel needs to be established soon. However, the popular backing for such steps is nowhere to be seen. German taxpayers balk at the idea of larger transfers of money to southern Europe. Greek and Spanish voters do not seem remotely ready to see their countries’ budgets made in Brussels. The European identity needed to make “Europe” work is not strong enough. But without it the EU looks like a building with shallow foundations, trying to withstand a political and economic earthquake. . . .

After a recent EU summit that saw the adoption of German-inspired fiscal rules, Volker Kauder, the parliamentary group leader for Chancellor Angela Merkel’s Christian Democrats, exulted: “Now Europe is speaking German”. But that is not true, literally or metaphorically. It is far too soon to proclaim that Germany’s economic “stability culture” has been internalised by southern Europe. . . .

The barnstorming Le Bourget speech that launched the campaign of François Hollande, Mr Sarkozy’s chief rival, is full of references to great figures from French history – from Clemenceau to Camus. It is these cultural roots that give the speech its colour, its passion and its sense of history. The EU barely features.

In fact, as the French election has proceeded, so the debate has become more nationalistic. The authorities in Brussels, who are convinced that Europe must press ahead with deeper integration have instead had to listen to Mr Hollande promising to “renegotiate” the EU’s new fiscal pact and Mr Sarkozy threatening to pull France out of its agreement on border-free travel. Elections in Greece next month are also likely to see a sharp increase in nationalist rhetoric – particularly after the recent shocking suicide of a pensioner, who killed himself in front of parliament and left a note accusing Greek politicians of being traitors who had sold the country out to foreigners.

Group identities can be forged in moments of crisis and war. But, far from “making Europeans”, this current crisis is encouraging the citizens of the European Union to fall back on older, more deeply-rooted, national identities.  (photo: Ingram Pinn/Financial Times)