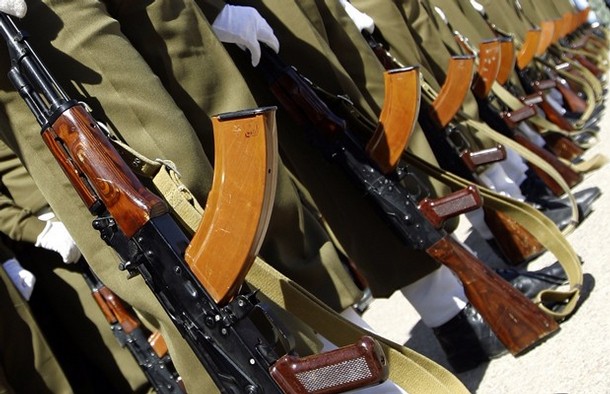 From Andrew Rettman, the EUobserver:  Between 300 and 500 European soldiers of fortune, including EU nationals, are working for Colonel Gaddafi in Libya, a leading criminologist has said.

The European mercenaries are mostly specialists in heavy weapons, helicopter technology and tactics and command fees of several thousand US dollars a day. The majority come from Belarus, Serbia and Ukraine. There is a significant amount of Polish helicopter experts. Belgian, British, French and Greek nationals are also involved.

The Europeans come on top of much larger numbers of hired fighters from the Central African Republic, Chad, Niger, Mali and Somalia, who are paid up to $2,000 a day. The men come and go via the 15-or-so still-operational military airports in southern Libya. . . .

The information comes from Michel Koutouzis, a Greek expert on organised crime, whose French-registered company, Lotophages Consulting, does research on security issues for the EU institutions, the UN and the French government, and who spent February and March travelling in north Africa. . . .

An EU security official and a Nato contact said they have not seen any internal reports about mercenaries. But the Nato source pointed to a press report about Colombian snipers in Misrata.

Looking at the history of mercenary activity in Africa, Alex Vines, a researcher at the Chatham House think-tank in London, said: "European mercenaries were a problem in the 1960s and then again in the 1990s after the Cold War ended. But it has become much more Africanised since then."

He added: "The definition of ‘mercenary’ is also an issue. What you more often have is individuals who are involved in selling weapons and then providing a bit of advice and training before disappearing."  (photo: Getty)  (via the Young Atlanticist Network)