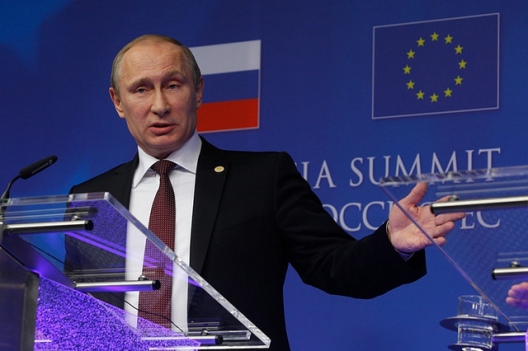 On one hand, there are European countries reasonably bemoaning years of declining American leadership and resolve. On the other, and unjustifiably, many of the same nations are using this as the ideal camouflage for dodging permanent measures, including greater military preparedness, against Russia. It’s a self-inflicted chokehold that Vladimir Putin observes at his pleasure.

Gen. Philip Breedlove, the American who is NATO’s commander in chief, has questioned what he sees as Alliance members’ willingness to run from a long-term, systematic response to Mr. Putin’s trampling on Europe’s post-1989 order.

Speaking last week in Ottawa about the probability of Russia’s continuing destabilization of Ukraine as opposed to a full-fledged Russian invasion, the general argued: “It’s the most troublesome for NATO because if the forces do not come across the border, my guess is that many will want to try to quickly go back to business as usual. I, for one, don’t believe annexing Crimea is business as usual.”

So give the Obama administration credit for acknowledging that, with this Russia, there can be no return to the status quote ante of “modernization partnerships” and “positive agendas.” The administration, for now, is more comfortable stating that truth than its allies apart from Poland, Britain and the Baltic states.

Western Europe has a one-off exception in neutral Sweden which is daring to call for “doctrinal change” in its military perspective. It represents recognition of what Foreign Minister Carl Bildt described to me as the “dangerous landscape'” created by an “openly revisionist Russia” seemingly willing to go on redrawing Europe’s map. The result, Mr. Bildt said, is a plan to increase Sweden’s defense budget by 10% to 15% over the next few years while eliminating or cutting back on projects with Russia.

As to why Russia feels so emboldened, Mr. Bildt added: “Putin has seen the United States absent from the geopolitics of the Eurasian area. . . .”

Dutch Foreign Minister Frans Timmermans has said his top priority for this fall’s NATO summit in Cardiff, unlike America’s, is launching a new round of nuclear disarmament in Europe.