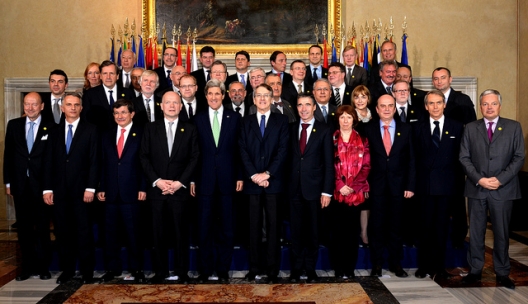 Europeans are becoming less capable militarily, having moved from a military reform to austerity paradigm since 2008. While NATO-Europe spent some US$282 billion in 2011, Europeans can collectively barely deploy and sustain 100,000 soldiers for external operations (and much fewer for robust interventions). In contrast, the United States has a deployable capacity of around 400,000 troops. The general consensus amongst defense experts is that many European governments will soon have little more than hollowed-out “bonsai armies.” However, it would be wrong to say that Europeans are entirely incapable. According to the European Defence Agency, EU member states had roughly 54,000 troops deployed externally during 2011 (through NATO, the EU, the UN, and nationally) — which, if taken as whole, is far more than any other country bar the United States. . . .

Apart from shifting geo-strategic priorities, there is a growing consensus in Washington that the United States will need to use its military forces more parsimoniously in future. Notwithstanding current budgetary difficulties, the
United States will remain the pre-eminent military power in the world for the foreseeable future. This is mainly because the U.S. military budget is overwhelmingly the largest in the world; thus, the country’s current technological and research and development lead will remain. That said, for budgetary, political, and geo-strategic reasons, the United States may reduce its global military presence in the future, and continue to “lead from behind” by increasing its reliance on others — including Europeans — to assume some of its current military roles, such as protection of the global commons.

That creates an opportunity to strengthen transatlantic relations. The partnership will remain central to both the United States and Europe, but it will be largely based on what each party can bring to the table. The conclusion of the Transatlantic Trade and Investment Pact (TTIP) between the EU and the United States may provide considerable energy to this partnership, boosting political relations beyond the economic dimension proper, and encouraging greater transatlantic strategic convergence.

The EU and the United States increasingly work on a host of international security issues together, such as the Iranian nuclear program. A much stronger and more effective EU-United States partnership could, in time, set strategic objectives for transatlantic cooperation, while NATO would remain a powerful military option for their implementation.

For example, Europeans and Americans may adopt different approaches to providing security in different theatres, from the Middle East to South and East Asia, based on respective strengths and know-how. Whether this happens will in part depend on Europeans’ ability to take autonomous action, notably in their neighborhood. In turn, this will depend on European willingness to enhance their military capabilities. Enhanced European strategic autonomy would be unlikely to lead to a neat geographic division of labor between Europe and the United States But the new transatlantic bargain could contain three parts: NATO should continue to guarantee territorial defense; the EU should take the lead for operations in Europe’s neighborhood where the United States has no interest; and NATO would only act beyond Europe’s borders when the United States wished to be involved.

In that context, the EU could consider developing its role in three areas: 1) protecting trade routes and access to resources; 2) responding to crises in Europe’s immediate neighborhood; and 3) the external aspects of internal security, such as organized crime and terrorism. For example, naval operations, like the current EU mission to tackle piracy on the waters off Somalia — which was deployed in part because of the disruption to EU-Asia shipping — may become increasingly important.

This new division of labor probably seems fantastic to some Atlanticists, partly because they are more comfortable working through NATO, and partly because the problem in EU-United States relations is on the EU side. However, Atlanticists should worry more about EU weakness than strength. Given the combination of emerging changes in Washington’s strategic focus, some diverging transatlantic security priorities, and the growing relative weakness of European military power, NATO will not have much of a political future unless the EU becomes a stronger international actor. If the EU remains weak, then the European parts of NATO will remain weak, and everyone loses.

Daniel Keohane is senior researcher and head of strategic affairs at FRIDE.