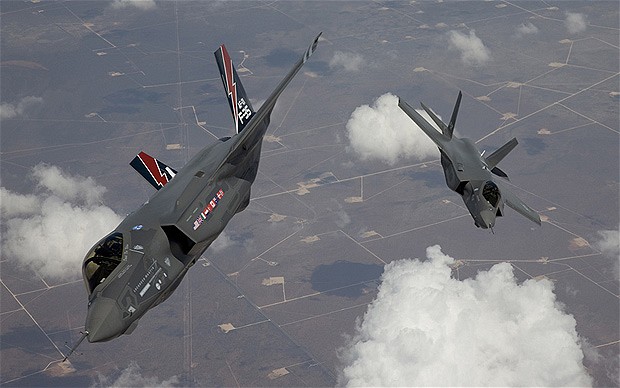 From Andrew Hough and Thomas Harding, the Telegraph:  The Royal Navy’s multi-billion pound fighter plane programme is under threat amid claims that its new all-purpose jets cannot land on aircraft carriers, it has emerged.

The “F-35 Joint Strike Fighter Concurrency Quick Look Review” claimed the flaw meant that the “arrestor” hook, used to stop the plane during landing, was too close to the plane’s wheels.

When a fighter lands on an aircraft carrier an arrestor cable catches the hook on the back of the aircraft, preventing it from overshooting and ditching into the sea.

The documents warn of "major consequences" to the aircraft’s structure and cast doubt on the readiness of the JSF to provide close-air support, which is seen as critical to a carrier’s role in providing amphibious landings. . . .

If such a redesign is proven to be too costly or difficult to implement, it warns that the entire F-35C programme may have to be scrapped.

Britain is due to buy around 50 aircraft at a total cost of about £5 billion but senior Navy sources admitted last night that on current budget, the MoD will have just six available by 2020.  (photo: Reuters)