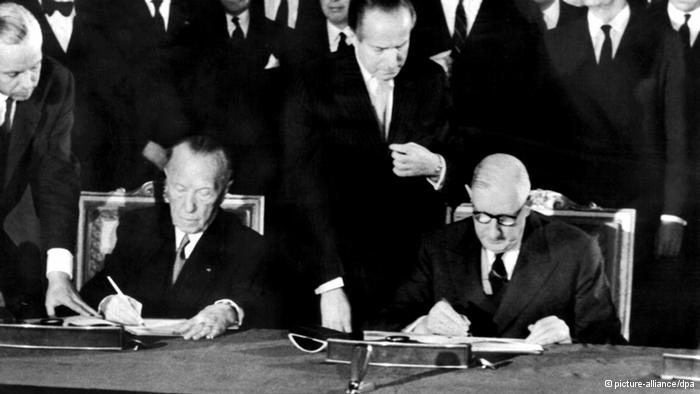 From Laurent Fabius and Guido Westerwelle, Guardian:  For centuries, our two countries were rivals, adversaries, even "hereditary enemies." Their relationship went through its most tragic period during the two world wars, particularly with the crimes committed by the Nazi dictatorship. We must be aware of this historical dimension, in order to get an idea of the courage and audacity shown by Konrad Adenauer and Charles de Gaulle in signing the Elysée treaty on 22 January 1963.

The text of the treaty is short and compact, but its content is almost revolutionary: in it, Germany and France commit themselves to nothing more and nothing less than "arriving, insofar as possible, at a similar position" on all the important economic, political and cultural issues. Fifty years on, the treaty is still just as relevant. The key themes of its preamble – reconciliation, young people, solidarity and Europe – embody the essence of our partnership. Over the years – beyond the vicissitudes of everyday life – it has enabled us to create a closeness and friendship that few peoples share.

Centuries-old enmity can give way to profound friendship: this is the message of the Elysée treaty, which is of universal significance. For we have successfully carried out reconciliation between the Germans and French. Today the polls show that more than 85% of our fellow citizens have a good or very good image of the neighbouring country. We have a common history textbook, a Franco-German Brigade, a binational television channel – Arte – and many other institutions of dialogue and integration between our two peoples. Added to these are the close ties between the two countries’ peoples. Today there are more than 2,000 twinnings between German and French towns and cities, which decisively helps boost our social and cultural exchanges. Our economies are closely linked. . . .

In a spirit of solidarity and compromise, Germany and France want to continue tackling together the great challenges of our time, in order to ensure growth and prosperity, encourage innovation and education, protect the environment, guarantee a secure and sustainable energy supply, respond to the new questions of the computer age and act upon our commitment to peace, security and stability in the world. Germany and France share the same determination to work for a free, democratic Mali which decides its destiny. Along with our European Union partners, we shall make an important contribution to the future of that African state.