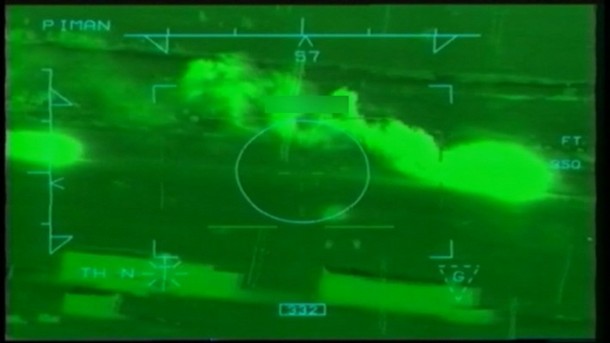 The action was a significant step-up in NATO’s operations and a major boost to Libyan rebels on the ground, just a day after rebel fighters forced government troops from three western towns and broke the siege of a fourth in yet another erosion of Gadhafi’s power since the eruption in mid-February of the uprising to end his 42-year rule.

The Apaches hit two targets near the coastal city of Brega, according to a statement from the Ministry of Defense in London. It said they took off from HMS Ocean, stationed off the Libyan coast and returned safely after completing their mission in the early morning hours.

British Maj. Gen. Nick Pope said the Apaches targeted a radar installation and a military checkpoint. "Hellfire missiles and 30mm cannon were used to destroy the targets," he said.

"This successful engagement demonstrates the unique capabilities brought to bear by attack helicopters," Bouchard said in a NATO statement released earlier. "We will continue to use these assets whenever and wherever needed, using the same precision as we do in all of our missions."