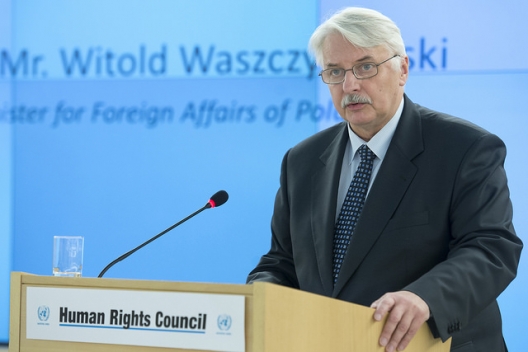 [Judy Dempsey]: How are Poland’s national interests different now from under your predecessors?

We are coming back to the ideas of the first Law and Justice government of 2005–2007. At that time, we tried to convince people that it was not enough to be a member of NATO. That’s why we started those long discussions with the Americans over missile defense.

JD: Because you didn’t feel secure?

WW: We joined NATO in 1999 as a secondary member under political conditions, because simultaneously with the enlargement of NATO there was a NATO-Russian declaration that NATO troops could not be deployed in this part of Europe. Our membership is conditional. If there is a problem, which divisions would support us, from where, and when? So that was the problem when we started the discussions about security.

That is the most important problem, because Poland has had bad experiences in its history. We want to be cautious. We have a war behind our doors right now. We have an aggressive neighbor that is openly proclaiming the redrawing of the borders of Europe. We don’t want to wait to be tested for years. We want to be protected right now. That’s all.

JD: So you are making amends for the shortfalls of Poland’s original membership in NATO?

WW: We are not asking for a lot. We are just asking for a token, some symbolic presence that would be proof that in case of problems, there would be a determination to defend us.

JD: Will the NATO summit in Warsaw in July fully embrace the alliance’s Eastern members?

WW: We are telling NATO that the decisions of the [September 2015] Wales summit are not enough; think about how to reassure us, how to help in case we have an incident. Russia now has anti-access and area denial [capabilities] that can prevent and hamper assistance. That is why we have to go beyond Wales and create a real presence on NATO’s Eastern flank. We don’t want to break the Paris Declaration of 1997. We don’t want to break NATO’s relationship with Russia.

The other part [of what we are asking], about military deployment, refers to substantial troops on the territories of new member states. At that time, “substantial” was defined as two heavy divisions. We are just talking about a multilateral brigade.