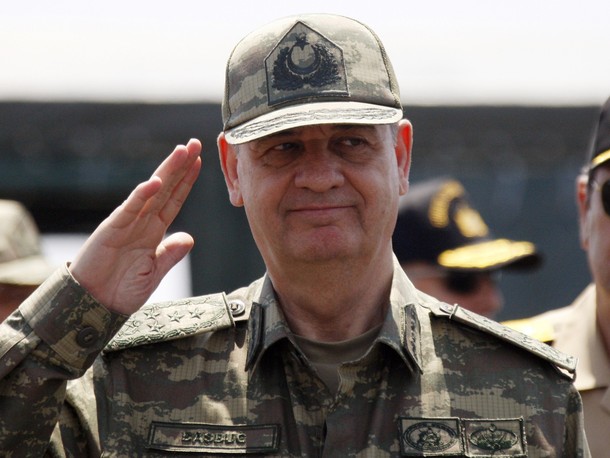 From MSNBC:  A former military chief was jailed Friday, accused of leading a terrorist organization and plotting to bring down Turkish Prime Minister Recep Tayyip Erdogan’s government, his lawyer said.

Gen. Ilker Basbug was arrested and placed in a prison near Istanbul overnight after seven hours of questioning by prosecutors investigating allegations that the military funded dozens of websites aimed at discrediting the Islamic-rooted government in 2009.

Basbug, who retired in 2010, is the highest-ranking officer to face trial in the so-called Ergenekon case, a long-running crackdown on EU candidate Turkey’s once all-powerful military and secularist establishment. . . .

Turkey’s military, NATO’s second-largest army, has long seen itself as the guarantor of the country’s secular constitution, and had staged three coups between 1960 and 1980 and pressured another government from power in 1997.

"We can say it is really tragicomic to accuse somebody who commands such an army of forming and directing a terrorist group," broadcaster NTV quoted Basbug as telling the court on Thursday. . . .

The decision to send Basbug to jail came hours after prominent Turkish journalists on trial over alleged ties to the ultra-nationalist Ergenekon network said the charges against them were politically motivated and "a massacre of justice" in a case that has raised concerns over media freedom in Turkey.  (photo: Reuters)