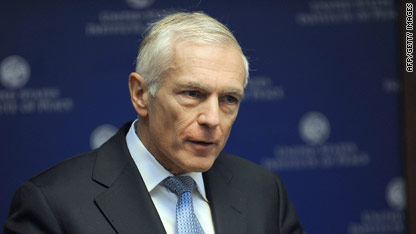 From Wesley Clarke, the Washington Post:  Understand the national interests at stake, and decide if the result is worth the cost.

We went into Lebanon with a reinforced battalion of Marines in 1982 because we believed that it was in our national interest to stabilize the situation after the Israelis had been forced out of Beirut. But after the terrorist bombing of their barracks killed 241 U.S. service members the next year, we pulled out. After the tragedy, any benefits seemed to pale in light of the cost and continuing risks.

In 1999, when we launched the NATO air campaign against Serbian ethnic cleansing in Kosovo, President Bill Clinton had to state publicly that he didn’t intend to use ground troops. He did so in an effort to limit the costs of an initiative that the public and Congress did not consider to be in our nation’s vital interest. The administration and I, as the NATO commander in Europe, were in a difficult position, and Serbian dictator Slobodan Milosevic knew it. But what Milosevic didn’t understand was that once we began the strikes – with NATO troops deployed in neighboring countries and the Dayton Peace Agreement to enforce in Bosnia – NATO couldn’t afford to lose. And the United States had a vital interest in NATO’s success, even if we had a less-than-vital interest in Kosovo.

In 2001, when the United States went into Afghanistan, it was clear that we had to strike back after the attacks of Sept. 11. And we’re still there, despite all the ambiguities and difficulties, because we have a vital interest in combating al-Qaeda and similar terrorist groups there and across the border in Pakistan.

How do we apply this test to Libya? Protecting access to oil supplies has become a vital interest, but Libya doesn’t sell much oil to the United States, and what has been cut off is apparently being replaced by Saudi production. Other national interests are more complex. Of course, we want to support democratic movements in the region, but we have two such operations already underway – in Iraq and Afghanistan. Then there are the humanitarian concerns. It is hard to stand by as innocent people are caught up in violence, but that’s what we did when civil wars in Africa killed several million and when fighting in Darfur killed hundreds of thousands. So far, the violence in Libya is not significant in comparison. Maybe we could earn a cheap "victory," but, on whatever basis we intervene, it would become the United States vs. Gaddafi, and we would be committed to fight to his finish. That could entail a substantial ground operation, some casualties and an extended post-conflict peacekeeping presence. …

To me, it seems we have no clear basis for action. Whatever resources we dedicate for a no-fly zone would probably be too little, too late. We would once again be committing our military to force regime change in a Muslim land, even though we can’t quite bring ourselves to say it. So let’s recognize that the basic requirements for successful intervention simply don’t exist, at least not yet: We don’t have a clearly stated objective, legal authority, committed international support or adequate on-the-scene military capabilities, and Libya’s politics hardly foreshadow a clear outcome.

We should have learned these lessons from our long history of intervention. We don’t need Libya to offer us a refresher course in past mistakes.

Wesley K. Clark, a retired Army general and NATO’s former supreme allied commander in Europe, is a senior fellow at the Burkle Center for International Relations at the University of California at Los Angeles.  (photo: AFP/Getty)