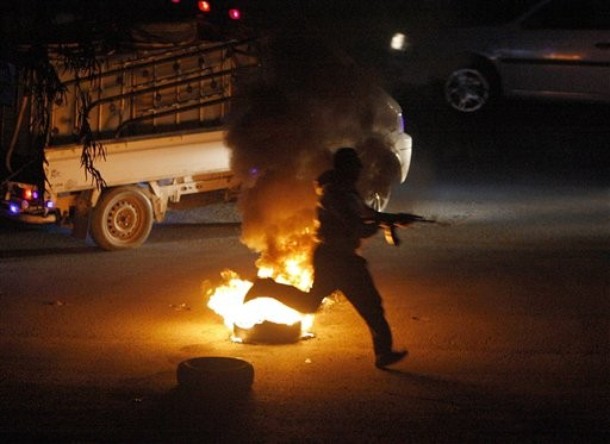 From Daniel Byman, Michael Doran, Kenneth Pollack, and Salman Shaikh, Brookings:  One variant on the invasion option that bears separate consideration because it could prove to be an attractive alternative is for NATO to invade Syria with Arab League diplomatic support and ideally some Arab military participation. UN authorization would be desirable, but given Russian opposition would probably not be forthcoming. Invading forces would depose the Asad regime, impose a ceasefire on the warring parties, and provide security for a long-term, international effort to rebuild Syria. The closest model here would be the NATO intervention in Bosnia in 1995—although it would differ in at least one critical respect since there would be no Dayton Peace Accords to precede it.

In a nutshell, NATO would have to agree to mount the invasion and then provide the military means to enforce the peace and protect a UN-led multilateral effort to rebuild the country. A key consideration would have to be that the UN would lead the kind of reconciliation talks between Sunni and Alawi in Syria that never occurred in Iraq. Likewise, NATO forces would have to remain for as long as necessary, even if in diminishing numbers, to ensure the Alawis and Syria’s other minorities that they would not be oppressed by the majority Sunni community (again, as NATO did in Bosnia, but the United States did not do for long enough in Iraq). In essence, NATO would depose the Alawis and other minorities and then work to protect them from a possibly vengeful majority.  Four conditions would have to be met for this model to be workable:

1. Turkey would have to be willing to provide the logistical base and much of the ground troops for the operation. . . .

Turkey would also be reluctant to spearhead an invasion because it would not want to significantly change Syria’s Kurds’ status, fearing unrest in Turkey itself. Of equal or greater importance, the long-term occupation and reconstruction of Syria would likely be well beyond Turkish resources alone. Thus, while Turkey would need to be a key player—perhaps the key player, as Australia was in the similar intervention in East Timor—it cannot be the only player; it will need financial help and multilateral assistance and cover.

2. The Europeans and the Gulf Arabs have to be willing to pick up much of the tab. . . .

3. The United States will have to be willing to provide critical logistical, command and control, and some combat components.  . . .

4. The operation must be conducted under a multilateral—if not international framework.  . . .

[S]ecuring any of these four conditions could prove impossible. The Russians have shown every sign that they would fight tooth and nail to prevent any UN mandate for such an operation. It is also not clear that the Turks are ready to make so large a commitment (although the worse things get in Syria, the more likely they probably would be since their own list of options looks even less appealing than our own). Western Europe and the United States are mired in severe economic difficulties, and the only time that the Arab states were willing to pick up the tab for a major Western military operation in the Middle East was the 1991 Gulf War. Thus, as attractive as this option might be, it will ultimately prove very hard to implement.