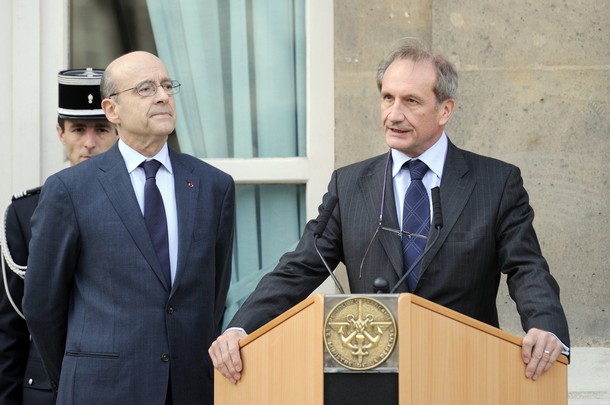 From Matthew Lee and Raf Casert, the AP:  At a European Union meeting in Luxembourg, Paris lamented the limited U.S. military role in Libya and chided Germany, too, for its lack of involvement. In a dire analysis, France’s defense minister said that without full American participation in the combat operation, the West probably couldn’t stop Gadhafi’s attacks on rebel-held cities.

French Foreign Minister Alain Juppe shredded NATO’s united front, saying its actions to this point were "not enough" to ease the pressure on the city of Misrata, which has been subjected to weeks of bombardment by forces loyal to Gadhafi.

"NATO absolutely wanted to lead this operation. Well, voila, this is where we are," Juppe said. "It is unacceptable that Misrata can continue to be bombed by Gadhafi’s troops. …"

French Defense Minister Gerard Longuet complained that France and Britain were carrying "the brunt of the burden." He said the reduced U.S. effort – American forces are now in support, not combat, roles in the airstrike campaign – have made it impossible "to loosen the noose around Misrata," which has become a symbol of the resistance against Gadhafi.

Longuet also criticized Germany, which is not taking part in the military operation, saying that Berlin’s commitment to primarily back a humanitarian effort only was "secondary" at best. Germany does not take part in NATO’s military airstrikes in Libya because it sees the operation as too risky. Italy also has been reluctant to get involved in the airstrikes because it had been Libya’s colonial ruler.

France’s frustration with the stalemate on the ground, where Libyan rebels have struggled to capitalize on Western air attacks, has been echoed in several Western capitals, but rarely were the comments as barbed as Juppe’s.

The reduced U.S. role since NATO took over command on March 31 has clearly affected the operation.

"Let’s be realistic. The fact that the U.S. has left the sort of the kinetic part of the air operation has had a sizable impact. That is fairly obvious," said Swedish Foreign Minister Carl Bildt.  (photo: Getty)