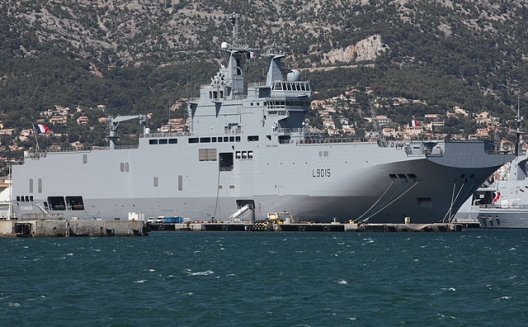 From Reuters:  France suspended indefinitely on Tuesday delivery of the first of two Mistral helicopter carrier warships to Russia, citing conflict in eastern Ukraine where the West accuses Moscow of fomenting separatism. . . .

“The President of the Republic considers that the situation in the east of Ukraine still does not permit the delivery of the first BPC (helicopter carrying and command vessel),” said a statement from President Francois Hollande’s office.

“He has therefore decided that it is appropriate to suspend, until further notice, examination of the request for the necessary authorization to export the first BCP to the Russian Federation.”

From BBC:  Last month, he said that respect for the 5 September ceasefire was an essential condition for the handover to take place. But since the nominal truce came into force, more than 1,000 people have been killed, out of a total of more than 4,300 since April.

Foreign Minister Laurent Fabius told France Inter radio that “on the Russian side, there is an unacceptable direct or indirect presence on the side of the separatists.”

From AFP:  Russia has reportedly warned Paris of “serious” consequences unless France delivers the first of two Mistral-class helicopter carriers on order by the end of November.

But Moscow’s reaction was relatively calm after Hollande’s announcement, with Deputy Defence Minister Yury Borisov saying Russia did not immediately intend to file a claim against France for breach of contract.

However, Borisov told the ITAR-TASS news agency that if France ultimately refused to hand over the ship, Russia would “go to court and impose fines.”

“Everything is written in the contract. We will act according to the wording of the contract, like all civilised people,” Borisov said.