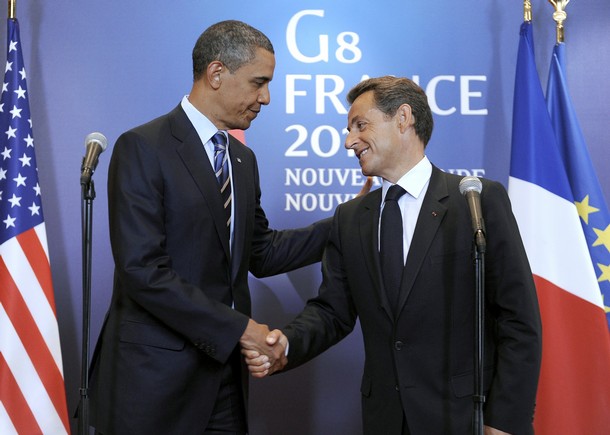 From Sam Schulman, the Weekly Standard:  As Maine is New England’s Texas, France is Europe’s U.S.A. It’s big. It’s ornery. Like us, the French are notably more inward-looking than Europe’s other populous, geographically big, and prosperous states. Despite France’s co-leadership of the European unification project, a new German Marshall Fund study shows the French have the least confidence in EU leadership, are more anti-EU than any other EU country except the U.K., and have the largest percentage who think the euro has been bad for their economy​—​a solid 60 percent majority. France may symbolize cosmopolitanism to the world but doesn’t itself partake. Over 92 percent of the French never leave the hexagone during their long vacations. Italians are 60 percent more likely to visit another EU country, Germans 227 percent more likely, and sea-girt Britons 314 percent more likely to brave the Channel.

The French presidential election, with primaries next month and a finale next spring, also mirrors our own. Sarkozy, France’s well-tailored and glamorous president, will like our own be seeking a second term. This year he finds himself in a predicament similar to President Obama’s. His popularity has reached historic lows measured in poll numbers that seem relatively unresponsive to his words or deeds. From an unprecedented 30 percent in the spring, Sarkozy’s approval percentage has risen to only 37 percent after a summer spent on familiar problems: the Libya police action and a financial crisis at home. Sarkozy’s rivals, like Obama’s, enjoy the media spotlight and predictions that convince them that the only elections that matter are their party primaries, which take place next month. The winner of the Socialist party nomination will step into the shoes of “Generic Sarkozy Opponent” and win the presidency next April or May, much as America’s own beloved Generic Republican Candidate stands to beat Obama. . . .

The French thought they had elected a Giuliani, but for the second half of his five-year term Sarkozy has governed and sometimes spoken like a Franco-Hungarian Jon Huntsman. He has called for higher taxes on the rich, has yielded to protesting unions and students, and has been a loyal member of NATO and a good European. So good a European, in fact, that this summer he and his German counterpart Angela Merkel proposed themselves as a Bismarck/Napoleon consortium to rule a more forcibly united EU. Sarkozy has a valid claim to call the war against -Libya’s Qaddafi his war. If Obama led from behind, Sarkozy followed from out front. It was Sarkozy who decided that it was imperative to back the rebels with Western arms, who convinced British prime minister David Cameron to join him in persuading Obama to go along (and to provide the bulk of the firepower). So Sarkozy’s prospects in the 2012 election should interest those on either side of the debate about whether “electability” matters to electability. He is, in French terms, the sort of non-Tea-Party, un-Southern-accented, social and economic moderate who doesn’t give the French equivalents of David Brooks the heebie-jeebies. . . .

Obama is inclined to do nothing different during the next year, but were he to undertake any of a number of actions to conciliate the rebellious voters of 2010, he could make his reelection probable and put his party in a much better place.

On the other hand, the president of France poses as a man of action, and may well be one. But his actions—​some of them ill-advised, some of them perfectly pitched​—​will have no consequences. For example, Sarkozy has spent the summer pushing a balanced budget amendment, called la règle d’or, through the legislature. The French public wants it, the Socialists, idiotically, opposed it​—​and it will not make much difference to Sarkozy’s lack of popularity or the Socialists’ lead. The French voter is accustomed to seeing the political class make solemn, unbreakable pledges​—​such as the promise that nations entering the eurozone would never let deficits rise above 3 percent of GDP​—then ​break them with electoral impunity. It was not just Greece and Portugal but France and Germany who repeatedly violated these terms in the early 2000s, as Holland’s finance minister scornfully declared recently. Our own president has discovered that Americans do not reward speeches unaccompanied by action. Sarkozy has discovered that the French do not reward action even when he spares them the speeches.

Imagine a Sarkoized Obama (even if these statements are, clearly, packaged to feed the public). If Joe Biden were to say, as a Sarkozy adviser told Le Figaro, “When you’re in a war, you don’t spend time thinking about the next election.” Or were Jay Carney to declare, as Sarkozy’s communications chief did, “The president is convinced that the best way to campaign is to do his job—especially during the [opposition’s] primary.” Or if Obama were to think, as Sarkozy does, in the words of the same communications chief: “It is a time for decisions, not for speechifying. The French see what we do: You can’t establish your credibility by decree.”

Sarkozy’s strategy for reelection is not to say very much, not to expect very much, and to do what he pleases. On a number of matters it is prudent of him to wait, and even more prudent to remain silent. No one can possibly know the final outcome of causes he has been associated with, such as Libya and the fight to save the euro. An adviser put it well, speaking in July to Charles Jaigu of Le Figaro. Sarkozy disappointed those who voted for him, and they think they want a change. After they get a good look at the competition, they will see that “the president, finally, isn’t so bad.”

American voters, both right and left, want more and get more from their candidates than “not so bad” because they have the power to punish those who disappoint them​—​by choosing to replace them with someone whose differences are clear and distinct, even if doing so alarms the New York Times op-ed page. Would ordering things here as they do in France, eschewing divisiveness and seeking the center, improve the health of our politics? No​—​except for the sex part.