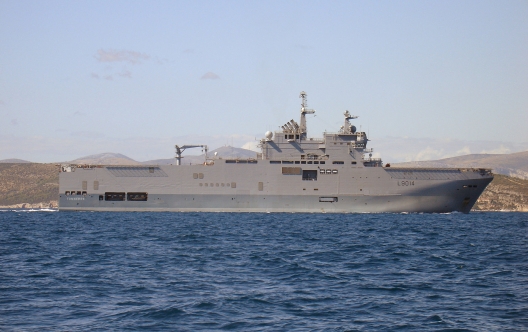 French defense officials are exploring ideas to avoid delivering a second helicopter carrier to Russia, including looking for an alternative client for the Sevastopol, analysts and an industry executive said.

A highly discreet review is being held as armed strife rises in eastern Ukraine and top US officials call for NATO allies to boost defense spending and act as a counterweight to Russia.

“The deal raises a fundamental policy issue not just for France but for the alliance,” said Robbin Laird of consultancy ICSA, based in Washington and here.

Paris is in a political crossfire between the US and Russia. Washington has publicly called for breaking the contract, while Moscow has threatened a hefty financial punishment while praising France’s “reliability as a partner.”

In 2011, Russia signed a deal for the two Mistral-class carriers, listed as amphibious assault ships or landing helicopter dock, worth €1.2 billion (US $1.6 billion) with a first delivery in four years. Moscow also holds an option for two more vessels.

France is effectively “trapped” on the Vladivostok, the first of the two ships, with a delivery in October, Laird said.

But French officials are reviewing the second vessel, along with considering offering the ship to another nation.

“The ministry is clearly looking for an alternative,” Laird said. Russia has yet to pay fully for the Sevastopol, allowing France some time to explore options, he said. That second ship is due for delivery late next year.

Loic Tribot La Spiere, chief executive of think tank Centre d’Etude et Prospective Stratégique, said he has heard of the search for alternatives and a possible re-sale to an ally.

An industry executive said President François Hollande and Foreign Minister Laurent Fabius have made public statements about honoring the Russian contract, seen effectively as Plan A, but “it’s logical” officials are also searching for a Plan B, which could lead to withholding the second warship.

France may have to take a financial hit, but a political statement could be made.

“The situation is not easy, but France can show leadership,” Laird said.

A senior defense analyst said, “It’s highly likely Defense Ministry analysts are looking at all the possibilities. This is primarily a political problem.

“The industrial aspect is not the key factor as the contract is not vital for the French defense sector,” the analyst said. “What is at stake is the bilateral relations between France and Russia. And there is also the fact there are other European states exporting arms. . . .”

The rear part of the Sevastopol hull, representing 60 percent of the deal, is being built by Russian local partner OSK at Saint-Petersburg. That portion is due to be sent in late June to Saint-Nazaire, northern France, for fitting on to the hull built by shipbuilder STX.