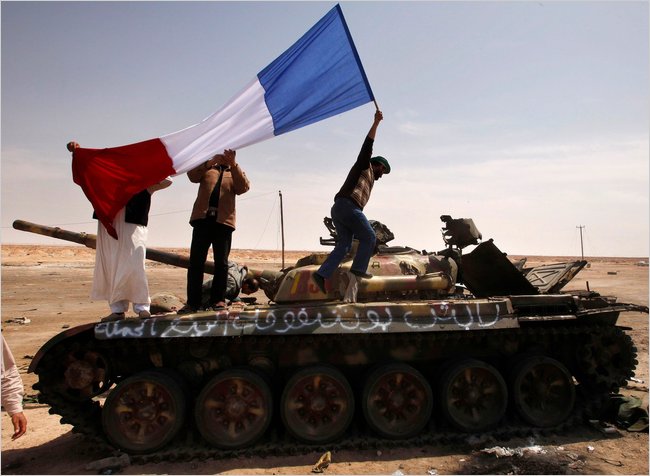 From Steven Erlanger, the New York Times:  France on Tuesday found itself engaged in three shooting wars at once for the first time in memory, indicating a new muscularity in using power by the politically embattled French president, Nicolas Sarkozy.

French peacekeeping troops attacked the presidential palace in Ivory Coast in support of the United Nations overnight, while French planes were attacking the troops of the Libyan leader, Col. Muammar el-Qaddafi. French forces are also fighting alongside the United States in the war against the Taliban in Afghanistan.

“This is entirely new,” said François Heisbourg, a defense expert at the Foundation for Strategic Research here. “The reasons are different, but we are in three shooting wars simultaneously, and that in my memory has never happened before.”

With the loser of the Ivory Coast election, Laurent Gbagbo, negotiating surrender in Abidjan, France’s intervention in its former colony may prove to be of short duration. France hopes to be as lucky in the war against Colonel Qaddafi, who seems to be in the initial stages of trying to negotiate an exit.

In both instances, Mr. Sarkozy was the most active supporter of robust military action. But Mr. Sarkozy and his government have emphasized that they are using military force in the name of the United Nations, not out of any colonial impulse, with the aim of saving lives.

He claimed the use of force was justified by recent United Nations Security Council resolutions demanding the protection of civilians — a quick implementation of an idea, “the right to protect,” that has been floated for a decade.

So far, the Libyan intervention appears to be popular in France, with a strong majority of voters supporting it in recent polls.  (photo: Suhaib Salem/Reuters)