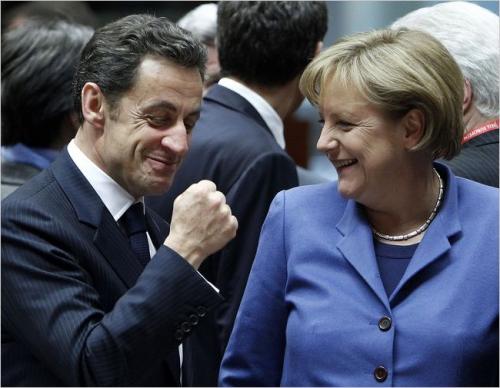 From the New York Times:  “There has been a tectonic shift in the way Germany acts in Europe,” said Ulrike Guérot, a senior research fellow with the European Council on Foreign Relations. Germans, she says, are “talking of behaving ‘normally’ now, like the others, and that means nationally. …”

“Germany is no longer, as a matter of course or of principle, the motor, heart and savior of Europe,” said Constanze Stelzenmüller, a senior fellow of the German Marshall Fund in Berlin. “This isn’t the Europe we signed up for. It’s much larger, much poorer, and we have to take care of our own.”

Germany always acted in its interests, Ms. Guérot said, but those were perceived as sublimated within the European Union and NATO, the two postwar multilateral institutions that both protected the new democratic Germany and kept its ambitions in check. Now Germany is turning more obviously to Russia for energy and commercial interests, she said, making its European and American partners uneasy. …"

With a neo-liberal coalition partner, the Free Democrats, and with important elections coming next month in North Rhine-Westphalia, which could cost her ruling coalition control of the upper house in Berlin, Mrs. Merkel stood up for German interests and was hailed afterward at home. …

Part of the change is generational, with Mrs. Merkel, who grew up in East Germany, representing those born after World War II, with only anecdotal knowledge of Nazi Germany. The members of Parliament are even younger, many of them teenagers or younger when the Berlin Wall fell in 1989.

So the German leadership paradigm from Konrad Adenauer through Helmut Kohl — roughly 1949 to 1989, when Germany was a crucial junior partner both for NATO and European integration — is gone. (photo: Reuters)