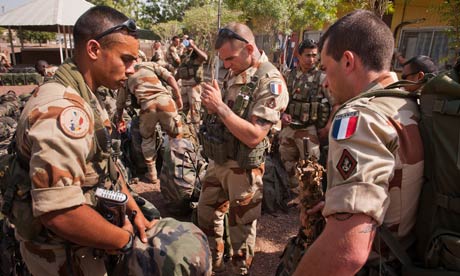 From Andrew Rettman, EUobserver:  A senior French military officer has said France is better off without Nato or EU help to "reconquer" north Mali.

Colonel Michel Goya, a serving officer and an expert at the Institut de Recherche Strategique de l’Ecole Militaire in Paris, told EUobserver in an interview on Thursday (24 January): "We have more freedom of action if we do it alone than if we go through Nato procedures. It would be even worse at EU level. If we do it alone, it’s more efficient in military terms."

He said Nato operations run into problems because some countries take a back seat.

"In Afghanistan, you have some countries who really fight and others who do very little. For example, the German contingent and the Italian contingent don’t have a combat role. There are many countries who do not want to fight, so working in the coalition is very tough," he noted.

"In Libya, we were less efficient because we used Nato command structures … If you have to react quickly to events, it’s better to do it at a national or bi-national level," he said.

He was even more critical of EU "battlegroups."

France, Germany and Poland on 1 January activated the Weimar Battlegroup – a joint force of 1,700 men which can, on paper, be sent to a hotspot five to 10 days after the decision is made.

"The EU doesn’t know how to wage war. It’s not prepared to launch military operations of this type [Mali]," Goya said.

"Battlegroups are fine if there is no combat. If we had to fight, we would probably see very few Germans and Poles in the field," he added. . . .

Goya said there is a clear command structure.

General Didier Castres, based in Paris, is in overall command of all the activities.

Another French general, Bernard Barrera, based in Bamako, is in charge of operations on the ground.  (photo: Nicolas Vissac/AFP/Getty)