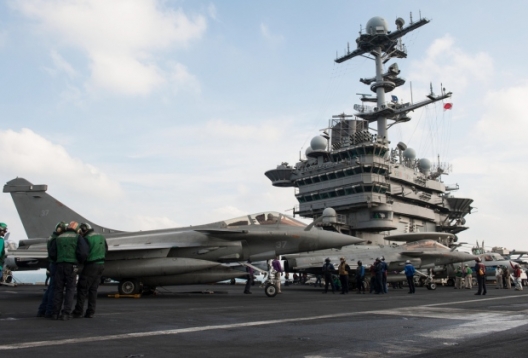 The two strike groups began conducting integrated operations Dec. 26 in the Gulf of Oman and have operated together in the northern Arabian Sea and the Arabian Gulf to enhance regional maritime security and stability.

Lt. Cmdr. Rob Littman, an F/A-18 pilot assigned to the “Ragin Bulls” of Strike Fighter Squadron 37, is a U.S. Navy pilot who had the opportunity to land on Charles de Gaulle.

“Landing on the Charles DeGaulle was a terrific experience,” said Littman. “It was remarkable how similar it was to landing on the Truman. The French were extremely professional and the transition was seamless. . . .”

“Planning and conducting actual missions together in this region brought our two fighting units closer together,” said [Capt. Bob] Roth. . . . “Carrier Air Wing 3 Hornets and Rhinos flew seamlessly from Charles de Gaulle, just as the Rafales and Super Etendards landed and launched effortlessly from Truman. We are a good team and I look forward to the next opportunity to operate with our trusted French allies.”

From Hendrick Simoes, Stars and Stripes:  Lt. Cmdr. Rob Littman, an F/A-18 Hornet pilot, was one of the few pilots from the Truman who had the opportunity to land on the Charles De Gaulle. “The ship is a bit smaller than the Truman, and they use an older version of the lens that we use to judge where you are on glide slope, but the rest of the procedures were nearly identical,” he said in an email to Stars and Stripes from the Truman. “I was more excited than nervous,” he added.

Rear Adm. Kevin Sweeney, commander of the Harry S. Truman Carrier Strike Group, in a phone interview with Stars and Stripes from out at sea said having the French come out to operate with the U.S. Navy took about a year of planning.

“Quite frankly, I think this is the first time this has ever happened — period — that we’ve done this level of cooperation and inter-operations before,” Sweeney said.