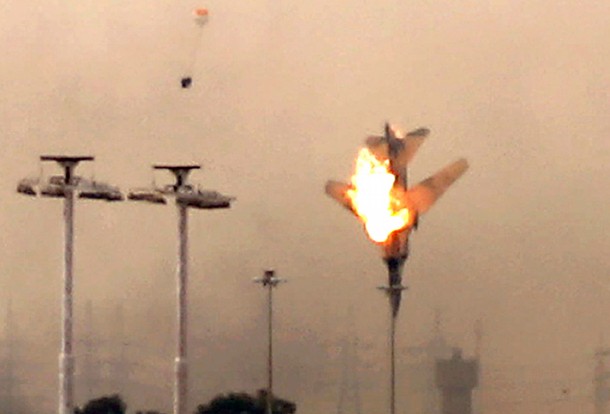 From Steven Erlanger and David Kirkpatrick, the New York Times:  American, European and Arab leaders began the largest international military intervention in the Arab world since the invasion of Iraq on Saturday, in an effort to stop Col. Muammer el-Qaddafi’s war on the Libyan opposition.

Even as Colonel Qaddafi seemed to be trying to wait out the West, as he has often before, Mr. Sarkozy announced that French and allied warplanes were already in the skies over Libya.

"Right now our planes are blocking airstrikes on the city," Mr. Sarkozy said, referring to Benghazi. "French planes are ready to act against armored vehicles that would be threatening unarmed civilians.”

He accused Mr. Qaddafi of “totally ignoring” both the Security Council’s demands for a cease-fire and his own promises to abide by one. But he added: "There is still time for Colonel Qaddafi to avoid the worst by complying with the U.N. resolution. The doors of diplomacy will open again when the fighting has stopped. …”

In Paris, the summit meeting was held over lunch at the Élysée Palace, and it included prime ministers or foreign ministers from Britain, Canada, Germany, Norway, Italy, Qatar, Morocco, the United Arab Emirates, Denmark, Belgium, Spain and the United States, in the person of Secretary of State Hillary Clinton.