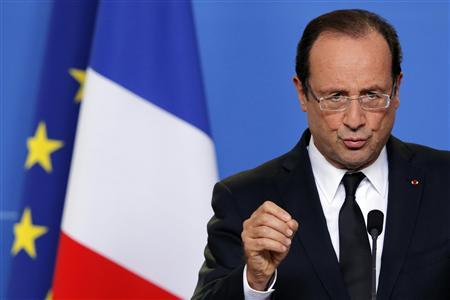 From Frank Jordans and Sarah DiLorenzo, AP:  French President Francois Hollande demanded on Monday that the United States immediately stop its alleged eavesdropping on European Union diplomats and suggested that the widening surveillance scandal could derail negotiations for a free-trade deal potentially worth billions.

The Obama administration is facing a breakdown in confidence from key allies over secret programs that reportedly installed covert listening devices in EU offices. Many European countries had so far been muted about revelations of the wide net cast by U.S. surveillance programs aimed at preventing terrorist attacks, but their reaction to the latest reports indicate Washington’s allies are unlikely to let the matter drop without at least a strong show of outrage. . . .

"We cannot accept this kind of behavior from partners and allies," Hollande said on French television on Monday.

He insisted the U.S. explain its practices and end the eavesdropping immediately. And he issued a veiled threat that France would dig in its heels on sensitive negotiations to ink a free-trade deal that would link countries that make up nearly half of the global economy. The deal would likely serve as a model for all future such agreements worldwide.

"We can only have negotiations, transactions, in all areas, once we have obtained these guarantees for France, but that goes for the whole European Union and I would say for all partners of the United States," he said.

From Stephen Castle and Eric Schmitt, New York Times:  In France, Foreign Minister Laurent Fabius said on Sunday that the government had urgently demanded an explanation from the American authorities. The reported American spying, if confirmed, would be “completely unacceptable,” he said in a statement.  (photo: Christian Hartmann/Reuters)