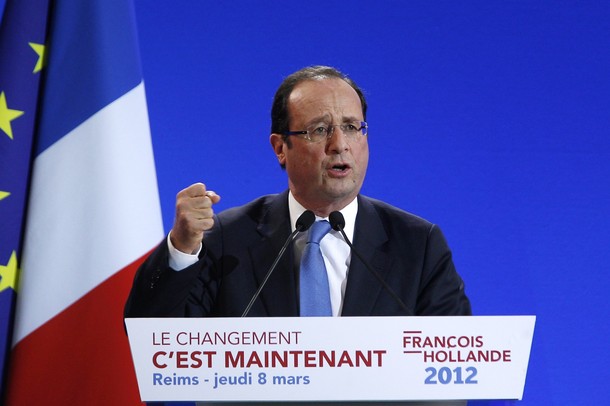 From Steven Erlanger, the New York Times:  Mr. Sarkozy has crept closer to the Socialist Party candidate, François Hollande, in opinion polls for the first round of voting, he remains more than 10 percentage points behind Mr. Hollande in a projected runoff between the two men. The French in general are tired of Mr. Sarkozy and anxious about the economy and the high rate of unemployment, the highest here in 12 years. But they are not passionate about Mr. Hollande either, so Mr. Sarkozy and his aides believe they have a chance to win by citing Mr. Sarkozy’s experience, decisiveness and leadership. . . .

Hollande, in a speech about national defense on Sunday, repeated his call to pull French troops out of Afghanistan by the end of 2012. He said he would maintain France’s nuclear deterrent and its seat on the United Nations Security Council and would work within NATO to ensure France’s independence of action.

He also said he would support new, harsher sanctions on Iran “if necessary” to stop Tehran from developing a nuclear weapon and to avoid “a unilateral military intervention.”

From François Hollande, interviewed by Spiegel:  [E]veryone knows my position on the fiscal pact, and on the day after the election they will have to take it into account. If I become president, France will not continue with the same policies as under Nicolas Sarkozy — both in domestic policy and in foreign and European policy. . . .

I’m also the candidate who knows that the German-French friendship is indispensable for Europe. And I will never let myself be carried away to making statements that would change it.   (photo: Reuters)