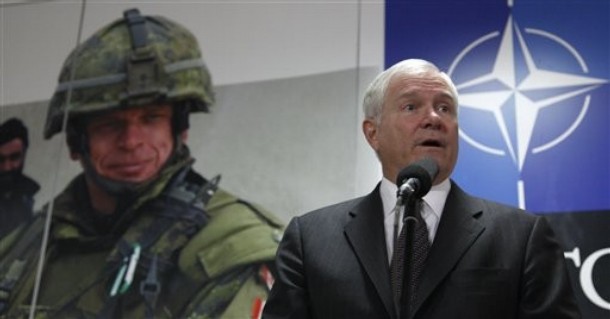 In a deliberately undiplomatic speech to NATO defense ministers, Mr. Gates called on European allies to put aside their domestic politics and work with the United States to secure the “semblance of normalcy” that he said was emerging in some parts of Afghanistan.

Mr. Gates made clear that the initial American troop withdrawals ordered for July by President Obama would be limited, perhaps to no more than several thousand troops. Pointedly, he told NATO that “we will not sacrifice the significant gains made to date, or the lives lost, for a political gesture. …”

Mr. Gates obliquely criticized NATO leaders for fueling a rush to the exits and what he said was undermining a commitment the allies made to Afghan security at a conference last year in Lisbon. “Unfortunately, some of the recent rhetoric coming from capitals on this continent is calling into question that resolve,” he said.  (photo: AP)