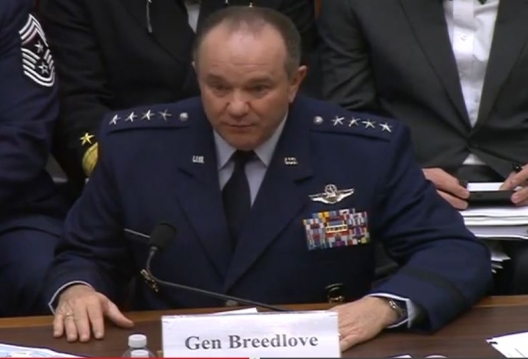 The cornerstone of EUCOM’s strategy is physical presence. Coupled with our visible commitment to maintain capabilities, readiness, responsiveness and our strategic level messaging, our presence demonstrates, to friend and foe alike, our absolute commitment to the sovereignty and security of every Ally.

The credibility and effectiveness of our response to Russian aggression in the East and growing threats in Southern Europe depend not only on the operational scale and geographic scope of our operations, but also their persistence and longevity. A temporary surge in rotational presence, for example, will not have lasting effect unless it is followed by the development and fielding of credible and persistent deterrent capabilities. Forward deployed air, land, and sea capabilities permits the U.S. to respond within hours versus days as crises emerge. We must follow our near-term measures with medium-term efforts to adapt the capabilities and posture of United States, NATO, Allies, and partners to meeting these new challenges. We must accelerate this adaptation because we now face urgent threats instead of the peacetime environment previously anticipated. NATO and our European Allies have recognized the absolute requirement to effectively counter Russian coercive pressure in the East as well as urgent threats in the South.

NATO has adopted the Readiness Action Plan (RAP) designed to meet quickly emerging threats emanating from both NATO’s eastern and southern flanks. The RAP features forces that can deploy in days – not weeks, an improved command and control capability (including forward headquarters), and the regular presence of NATO rotational forces in Eastern Europe for exercises and training. U.S. support to the RAP will be essential to its long-term success. Our European Allies have already offered to serve as primary contributors of land forces to the envisioned Very High Readiness Joint Task Force (VJTF), but U.S. participation with key enablers is critical to Alliance cohesion and capability. EUCOM is also responsible for implementing other key aspects of our support to the RAP, such as maintaining continuous presence in the East, enhancing the capabilities of Multinational Corps North East, and the establishment of a NATO command and control presence on the territories of Eastern Allies….

EUCOM needs sufficient resources to maintain readiness, execute assigned missions, and build capability and capacity of our Allies and partners to defend themselves and bolster regional security….

Overall reductions in the Department of Defense’s budget have meant the reduction of force posture in Europe. Nevertheless, in light of recent, significant changes to the European strategic environment, it is my judgment we must immediately halt any additional reductions to the number of assigned forces in Europe. At the height of the Cold War, there were more than 450,000 uniformed personnel stationed across the European Theater. Today there are fewer than 65,000 permanent military personnel stationed throughout the EUCOM AOR, of which 55,000 are in direct support of EUCOM missions, and 9,000 support the missions of other organizations, such as AFRICOM, TRANSCOM, NATO, and others. The EUCOM assigned forces are tasked with the same deterrent and reassurance missions we have performed for the past several decades. It is important to understand the critical roles these forces play in this theater before the Services recommend further reducing the current force posture in Europe.

On any given day, forces throughout Europe are engaged in a variety of activities and missions to include (1) Training of our forces in order to be ready, if called upon, to conduct full spectrum military operations; (2) Assuring our Allies of our commitment to collective defense; (3) Training and collaborating with our NATO Allies and partners to maintain interoperability; and (4) Working with our Allies and partners to effectively prepare for and support humanitarian assistance and disaster relief operations.In addition to my responsibilities as a warfighting commander, I also often serve in the role of a supporting commander. EUCOM forces are ready to support the needs and missions of four other Geographic Combatant Commanders, three Functional Combatant Commanders, and numerous Defense Agencies, including the ability to appropriately base and provide logistics support functions to forces assigned to operations in the AFRICOM and CENTCOM areas of responsibility.

Some have suggested we can mitigate the impact felt from a reduction in assigned forces through the augmentation of rotational forces from the United States. Rotational forces from the continental United States to Europe cannot completely fulfill strategic roles. The temporary presence of rotational forces may complement, but does not substitute for an enduring forward deployed presence that is tangible and real. Rotational forces also have an impact on our relationships with various host nations we will count on to enable operations; we might over reach to assume host nations will readily accept our new readiness construct. As I have said previously, virtual presence means actual absence. The constant presence of U.S. forces in Europe since World War II has enabled the United States to enjoy the relatively free access we have come to count on—and require—in times of crisis. Further reductions of both infrastructure and forces will reduce our access to key strategic locations during times of crisis.