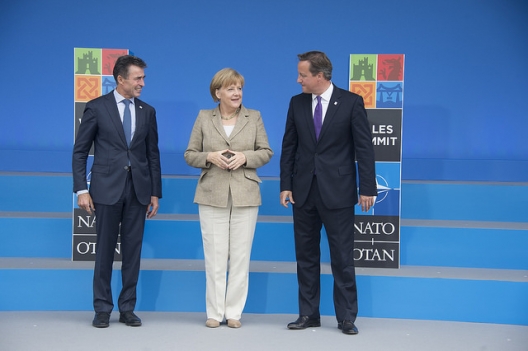 In the military sphere, the altered security order has led to a renewal of NATO’s role as both a defense alliance and a form of a life insurance, taking precedence over the EU. Meanwhile the eastern NATO states are asking for clarification of the alliance’s guarantees of common defense under Article 5.

The alliance has thus far reacted to the Ukraine crisis along three tracks: First, it has reassured its members militarily and politically, particularly through stronger air policing in the Baltics, increased naval presence, AWACS flights, and bilateral troop deployments. Second, the alliance has maintained political cooperation with Russia despite significant criticism at the Kremlin, stopping only civilian and military cooperation. Third, the alliance has begun making military plans to react to new threat situations. The central document in this last track is the Readiness Action Plan (RAP), which the alliance agreed on during the September 2014 summit. It has two tracks: the continuation of reassurance measures taken in early 2014, and the adaptation of the alliance to the new environment.

However, this means that the alliance must catch up in the areas it has neglected over the previous years. It needs to adapt its military capabilities, plans and posture so that neither its members nor potential opponents doubt the security guarantees that NATO promised it article 5 of the Washington Treaty. Specifically, as set out in the RAP, NATO must adapt its plans and where necessary develop new ones for the defense of its eastern members in case of emergency, and must also be capable of acting more quickly. For that it will restructure its rapid reaction force, the NATO Response Force (NRF), and develop a so called High Readiness Joint Task Force (VJTF) within the NRF, to be deployable on very short notice. The alliance will also reduce chronic deficits in intelligence capabilities, including the collection and analysis of information on potential or actual enemies and their forces. NATO will also preposition equipment in Eastern Europe to be ready faster locally, and rotate troops there to train.

As impressive as that may sound, the limits of this response are obvious. There is a certain irony in the fact that, while the defense alliance was essentially revived by this emergency, it is notoriously difficult to organize effective alliance defense against hybrid scenarios and to credibly provide alliance defense to exposed regions, especially the Baltic States. For in order to guarantee a comprehensive conventional defense, the Allies would have to invest a lot more, especially in traditional heavy equipment, and position it permanently on NATO’s borders. When it comes to hybrid scenario, NATO does not have all the necessary capacities: military means such as tanks or missile, can do only so much to stave off cyber-attacks, anti-NATO propaganda, infrastructure disruption, or “little green men” – Russian soldiers operating in Ukraine without insignia.

Credible deterrence does not come for free, and NATO members have announced at the Wales summit their intention to provide funds and raise their defense budgets to two percent (or resist reducing them further) – though admittedly over a ten-year period. However, this means it will no longer be possible to avoid taking on more debt in national budgets. . . .

Germany should maintain a close alliance with the United States. Without the US, the entire European negotiating position is weakened, politically and militarily. Unity is thus not only the organizing principle within Europe but also within the transatlantic relationship. . . .

Russia has already turned its back on the EU and defined its future in explicit opposition to the EU model. In countries like Ukraine, Georgia, and Moldova, however, there is a large contingent that would like a more Western orientation. The EU should not ignore this call, citing non-membership as an excuse to hide beyond the walls of Western alliance structures; its credibility and foreign policy goals would be permanently shattered, and its borders rendered less safe. A democratic, constitutional Ukraine is the best defense against seeing old superpower demands gain new strength and new nationalism gain ground within Europe. This would in the long term cost the European states a great deal of engagement and money but would permanently strengthen Europe’s security and stability. The price is amply justified.

Claudia Major is deputy head of the “International Security” Research Division of the German Institute for International and Security Affairs (SWP) in Berlin. Jana Puglierin is program officer at the Future Forum Berlin of the German Council on Foreign Relations (DGAP).