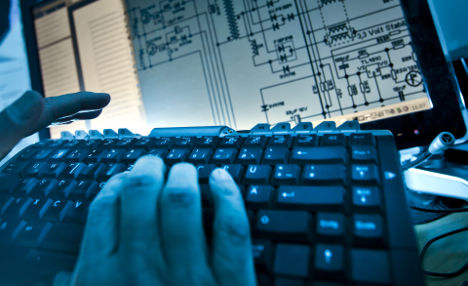 From Michael Fischer, DPA:  A digital projector shows a virtual war scene on the wall as Redland has attacked Blueland on the continent of Azoria in the middle of the Atlantic and partially occupies the country in a war over raw materials.

The UN Security Council has approved an intervention and the German parliament has agreed to participate, sending its Cyber Attack department into the war effort.

Digital tools like "John the Ripper," "hostenum" and "chmod" help penetrate Redland’s military intranet and shut down the air defense system. The war is all but won. The drill has successfully been completed.

The virtual exercise was run from Tomburg Joint Services Barracks in Rheinbach, near Bonn, where the Strategic Reconnaissance Command (KSA), a joint unit of the army, navy and air force, is based.

The 60-person Computer Network Operation (CNO) group of software experts has been practicing for cyber war here for years — until now in secret. The German Defence Ministry last summer did not even want to say how many soldiers were in the CNO. . . .

The unit’s purpose is to allow the German armed forces, or Bundeswehr, to tackle an enemy via the internet.

Germany’s defense against hostile attacks of the same sort is handled by a different agency, the German Federal Office for Information Security.

The armed-forces unit in Rheinbach already has an offensive capability. Operating from German soil it could penetrate foreign networks using hacker software that is freely available over the internet.

"We use the same wares everyone else uses," explains one CNO soldier. (photo: DPA)